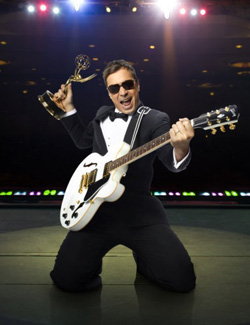 The Emmys air tonight with Jimmy Fallon leading the charge as host. It's a lot of pressure on the late-night personality; he's never hosted the award show before, and he has to compete with the memory of last year's MC Neil Patrick Harris who set the bar high (remember his fantastic musical opening?) Even so, I have high hopes for Fallon, especially after watching his fun Mad Men-themed Emmy promo. While there won't be an appearance from Robert is Bothered, if he brings out goofy characters like this guy, then it's sure to be a great time. Do you agree?

This is Us
This Is Us: How Randall's New Therapist Could Be the Key to Learning About His Birth Mom
by Kelsie Gibson 34 minutes ago