Costars Joseph Gordon-Levitt and Emily Blunt were joined by their Looper director, Rian Johnson, to talk about their new sci-fi flick at a press conference before their panel at Comic-Con. If you've seen the Looper trailer, then you know the mind-bending flick stars JGL as a younger version of Bruce Willis, who's sent back in time to be assassinated by himself. At the press conference, Gordon-Levitt talked about how exciting it was to share a character with Willis and how the prosthetics for the film even fooled his own mother. Here are highlights: 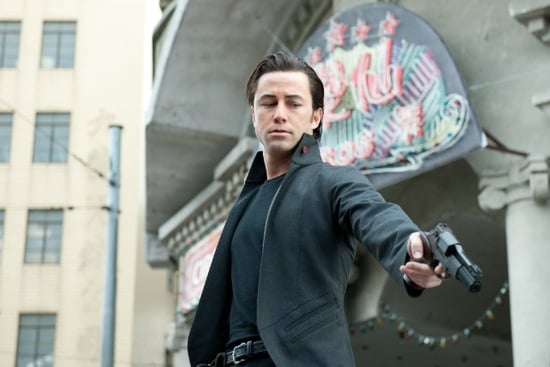 On the biggest challenge of playing a young Bruce Willis:
Joseph Gordon Levitt: "The thing I focused on most was his voice. The voice is what I look for, first and foremost, with just about every character I play. Bruce was really open and collaborative; he recored himself reading some of my voiceover lines which I thought was really cool. But mostly it was just hanging out with him, getting to know him, having dinner."

On whether or not the screenplay is a confusing read:
Emily Blunt: "I read about 30 pages of the script and I was already like, 'Get me in this movie!' because I loved it so much. It's so rich in complexity, and conceptually it's so exciting, but also emotionally it is too. I needed a few reads of it for sure."

On being attracted to the role:
EB: "I think it's the same for a lot of actresses, that you look for female roles that aren't objectified. I think it's harder to find that in these more sci-fi movies. And this character had such a singular voice, and she had a really rich past to delve into. She was a really tough cookie, a tough nut to crack. I enjoyed the nuances."

On action movies:
JGL: "I have a pretty eclectic taste in movies I like to watch and movies I'm inspired to work on. I don't think action for action's sake is so fun, but when it helps tell the story, I love doing a good fight scene."

On the first time Willis saw Gordon-Levitt wearing prosthetics to look like him:
JGL: "That's one of the highlights of the whole thing, was Bruce seeing me for the first time and tripping out a little bit. Because he's a sweetheart, but he's hard to rattle. So to get any reaction out of him his pretty exciting. There was one point when we were shooting one of our scenes together and really quietly he said, 'You sound like me.'"

by Grayson Gilcrease 9 minutes ago