Joseph Morgan has been terrorizing this season of The Vampire Diaries as Klaus, a vampire/werewolf hybrid with many decades of scheming and torture in his past. He's been a delight to watch on TV, but he's also making an appearance on the big screen this week in the 3D epic Immortals, alongside Henry Cavill (aka the next Superman) and Kellan Lutz. I chatted with Morgan this week to talk about his new film and how he feels about playing Klaus — and why he thinks it's time for his big bad villain to fall in love. 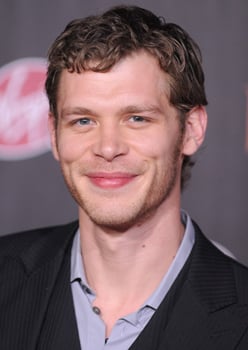 BuzzSugar: How has it been being the big villain of the season?
Joseph Morgan: It's been very, very fun; I enjoy my job immensely. I've been asked a few times, "what other character would you like to play?", and I just think I get the best stuff to do, or the most fun stuff at least. It's been great, but I feel like I've always wanted to play a character like this. When I read for the part, I got through the pages I had to read, and I looked at them like "Oh yeah, I know exactly how I want to do this." I guess because I'm a fan of the genre, [I was] subconsciously preparing for a role like this for a while, you know? It's an immense amount of fun and I get to push a lot of buttons with the other characters on set, which is always fun. And to play someone who really isn't worried about anything — there isn't any real threat to him most of the time — it's really an interesting challenge.

Buzz: The characters are trying to kill Klaus, so do you get panicked that the next script may have your death in it?
JM: Yeah, there's a little bit of that going on! Certainly, at the end of last season when I read the penultimate episode, all the way through they're talking about this plot to kill me, and I thought, what if I turn this page and that is what happens? But I trust them; if it's the end of the line, they're going to do it epically and it's going to be in keeping with the quality and the style they already put out. So I'm really not worried. I feel like if Klaus is going to die it's going to be the biggest dramatic death we've seen so far. There's some merit in that as well. But I do worry a little bit. I'm very, very happy to be a part of the show and I do feel like there's more that could be explored with this character.

Buzz: Would you ever want Klaus to get a love interest?
JM: Oh, man I hope so. I've been pushing them for ages. There's a certain amount of humanity they're bringing to the character now, which is really great, because people are starting to empathize with him, and really understand the dysfunctional background he comes from. But there's a side of a person that you only get to see when they're with someone they care about. And I think that's the side we're missing with Klaus. I think it would be wonderful if they were to introduce some sort of love interest for him. I'm confident if they think that's where we need to go, that's what will happen. I certainly keep nagging Julie Plec [The Vampire Diaries executive producer] about it.

Get more of my interview with Morgan, which includes his thoughts on who Elena should be with (hint: it's him) and what he thinks of his Immortals costar Henry Cavill, after the jump.

Buzz: Is there any current character you could see him with?
JM: I have pretty good chemistry with all of the girls who are all original, not original in the vampiric sense, but the cast members who've been there since the beginning, so I don't know. The difficult thing is, I suppose, were it to be with the regular cast members, their character would have to kind of forgive me for that whole blood sacrifice ritual thing. Might be a bit of a stretch. Although they forgive Damon for a lot, don't they?

Buzz: What can you tell us about this week's homecoming episode, the midseason finale?
JM: Well, actually it's Klaus's party; he throws a huge party for homecoming. He always says he has all the bases covered and he's prepared for anything, but as you know, there's a plan developing to put a stop to him, and I think there'll be something that he hasn't thought of, you know; it seems like there's always something that slightly goes wrong. There will be bloodshed — you know how they like to do on The Vampire Diaries. It's all sort of ramping up to this huge epic midseason finale, because we want there to be people with their jaws on the floor waiting for the next episode after Christmas.

Buzz: Will we get to see more of that humanity from Klaus?
JM: Yeah. Episode eight that just aired was the flashback episode where we saw a lot about his family and the relationship with his stepfather, or father, and his sister and brother and the pact they made to stick together. And episode eight and nine are really like a one-two punch; episode nine [this week's episode] will certainly give us some sort of result with the family issues and explore that dynamic further. And I think Julie Plec teased in the beginning that season three would be the season of the originals, and they really are coming through on that promise. It's been so wonderful adding Claire Holt [Rebekah] to the cast; she's such a terrific actress, and I'm a huge fan of Daniel Gillies [Elijah], so it's been really kind of amazing to expand the family and work with these terrific actors and see where we can take the storylines.

Buzz: If you were Elena, would you pick Damon or Stefan to be with?
JM: That's a pretty big hypothetical. I think Klaus has got a lot going for him. He's just misunderstood, that's all. The Salvatores are old news. She should move on now from that major crush that she had on both of them and become a real woman and fulfill her potential and be with the misogynistic, puppeteering, manipulative, egotistical, and deeply misunderstood character Klaus.

Buzz: Can you tell us about your character in Immortals?
JM: He's called Lysander, [and] he's about as far away from Klaus as I could get. Klaus is very much the top of the food chain in Vampire Diaries, and Lysander in Immortals is quite the opposite. He's the character with the lowest status. He starts off pretty disrespected in the film, and low, and he proceeds to slip further and further down the ladder. He ends up treated so badly, and [it's] really just so interesting for me to explore a part like that, with that feeling that everybody disrespects him, and every decision he makes is the wrong one and gets him further and further away from his goals. If I could be so bold, it's sort of a parallel journey with Henry Cavill's Theseus, who becomes more and more heroic during the film. Lysander is really on the opposite gradient.

Buzz: What was it like working with him and finding out he would be playing Superman?
JM: Actually I only found out after the film, but it was great. Henry's such a lovely, lovely man and just wonderfully giving. We all got pretty tight during those huge bootcamp workouts we had to do in the beginning, all the training before we got started. He was just incredibly generous and accommodating, and everything you would really want a leading man of a film to be. Just utterly humble and wonderfully grateful for the success that he's had. And he deserves it; he did a long stretch in The Tudors and I think that was like an apprenticeship towards him getting a film like this. He's the perfect Superman, let's be honest; he looks the part, he's in incredible shape at the moment. There's no one better to play that part than him. So I'm really happy for him.

Buzz: Did you and Kellan Lutz get to chat about playing famous vampires?
JM: I joined The Vampire Diaries after I shot Immortals, but I ran into Kellan at Comic-Con. So it's funny that I had jumped onto this vampire show now, and Ian and Paul both know Kellan pretty well, so it's funny. All the vampires mix. It was really nice, and he's a top guy. I didn't have much to do with him in the movie, but I saw him a little around the set. He's a really lovely guy and considering the huge amounts of success that all of those guys in Twilight have had, he's really down to earth and a wonderful human being.

Buzz: Have you appreciated how funny it is that you're in a movie called Immortals and the character you play on TV is also an immortal?
JM: Yes, the irony hasn't been lost on me. It is funny. Although I actually play a mortal in Immortals, but it's funny, it's great. I'm so glad because they went through a few titles before they came to Immortals. When I got the job it was called War of Gods, then it was called Dawn of War, and then they settled on Immortals finally. And I just think that's so much stronger, your know?

Buzz: You've done a lot of period films and "swords-and-sandals" epics. What attracts you to those roles?
JM: It's sort of what I can get really, to be quite honest with you! The DP [director of photography] of Vampire Diaries said that I have one of those faces that looks like it belongs in the past. I think that was a compliment, I'm not sure. My first four jobs were period things, historic projects, so it took a while [for me] to do any acting in jeans and t-shirts at all. But I love it; I love the preparation it takes. I'm big on research and stuff like that. All of that finding out about life-in-the-time-of is really exciting for me and informative. I'm OK with not doing another sword-and-sandals for a little bit. I've worn enough togas for the time being!

TV
The Vow: What Happened to Kristin Keeffe and Why She Went Off the Grid
by Stacey Nguyen 18 hours ago