In Journey 2: The Mysterious Island, the sequel to Journey to the Center of the Earth, Josh Hutcherson is back in the starring role as adventurer Sean Anderson, a young man on an exciting trip of epic proportions. The mission at hand? To find Sean's grandfather Alexander (Michael Caine), a famed explorer who went missing during his journey for Mysterious Island, a place that may be linked to the lost city of Atlantis. To round out the crew of this quest, Sean and his stepfather (Dwayne "The Rock" Johnson) enlist the help of two tour guides (Luis Guzman and Vanessa Hudgens). After some hijinks and a crazy helicopter crash, the four arrive at Mysterious Island, a fairly utopian and Avatar-looking spot that is also full of dark jungles and terrifying creatures. 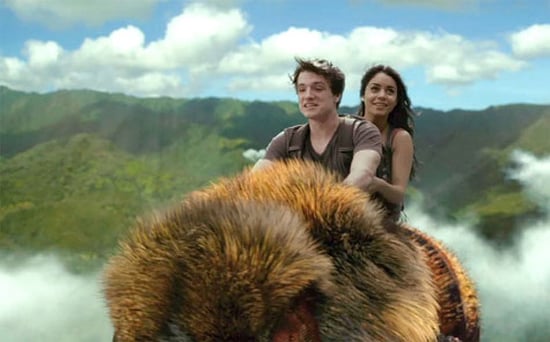 While Journey 2: The Mysterious Island looks like a sweet and silly movie, it's definitely geared toward kids. However, I'm down to follow Hutcherson just about anywhere, since I can only think of him as Peeta (his role in the upcoming The Hunger Games). See what you think of the film when you watch the trailer after the jump.