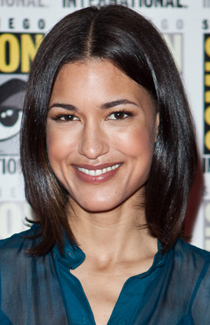 The Twilight cast hit Comic-Con to talk about Breaking Dawn part one, and I had a few minutes to chat with Julia Jones, who plays Leah Clearwater, the lone werewolf girl in the wolf pack. Jones chatted about her role in the film and her emotional scenes with Taylor Lautner, as well as getting to check out the big Breaking Dawn wedding.

BuzzSugar: What are we seeing from Leah in Breaking Dawn?
Julia Jones: All my scenes are with Jacob [and] that was such a treat because they're very intimate scenes, and pretty much until this point all our scenes were like, wolf pack scenes: all of us, running around and saying a few lines and doing a lot of "business." So to actually get to have these scenes that go somewhere, where you care so much about your character because you've been living her for so long, and to really get into what happens with both of them, is rewarding. I'm excited to see how that plays out.

Buzz: What is Leah and Jacob's relationship like in this film?
JJ: I have spent a bunch of time since this started trying to wrap my head around their relationship, because I don't think I have a relationship that's quite like it. I guess the closest thing is like family — the way that they drive each other mad and the way that they're so close mentally, but also emotionally. I think because of his situation with Bella and Leah's situation with Sam, it creates a bond that maybe isn't possible in the human world, because you can't read each other's thoughts.

To find out what else Jones talked about, including whether Jones ever thought Leah and Jacob should be together, just read more.

Buzz: Since you haven't seen the film yet, which scene are you most excited to watch?
JJ: I'm really excited to see how they deal with the birth and that whole thing. I saw the set and I saw some of the technical ways they were doing it and it blew my mind. So I've been trying to figure out how it's going to translate.

Buzz: Did you see any fake blood?
JJ: I saw some fake things, yeah. They've got some tricks up their sleeves. That's what I'm saying, I have a sense of how intricate and how complicated and in-depth and how far they went and I'm dying to see it.

Buzz: When you were reading, did you ever think that Leah and Jacob should get together?
JJ: He becomes the leader of the pack, [so] they're not equals the way I think about couples as being equals. He's an alpha, and there's a power disparity that doesn't feel romantic to me, so I never thought that maybe they should be together at all. I just felt some feelings that overlap with a romantic relationship; like, she needs things from him that you would need from someone you were in a relationship with: understanding, and for him to accept her, and for things that you don't normally need from anybody else.

Buzz: How has it been watching Taylor grow up over the course of filming?
JJ: It's lovely. He is really smart and wise beyond his years in a lot of ways. There are times where I feel like I'm talking to my bigger brother. He's had a lot of experiences I haven't had. But yeah, I totally watched him grow up over the last few years. And there's a parallel between our growth as people and our growth as characters. Sometimes I can't separate those two things; I don't know if I'm watching Jacob grow up, or if it's Taylor. I think it's probably both.

Buzz: What was it like at this point being the only girl in the wolf pack?
JJ: It changed. It's very different this time, because the dynamic of the wolf pack changed — Jacob and Leah and Seth sort of break off. It felt a lot more comfortable. Part of why she leaves the pack in the first place is because she feels like she doesn't belong there. She just feels so out of place and constantly trying to prove herself and be one of them, which she's never gonna be; she's not a guy. So when they leave, the dynamic shifts, and it's like I'm with my best friend and my brother. We just feel like this close, tight-knit family.

Buzz: What's your relationship like with the wolf pack cast members off-screen?
JJ: I am very close to them, so I feel protective of them, and they feel protective of me. We keep in touch a lot and I'm sure that we'll continue to do so.

Buzz: You're not in the wedding scene, but did you get to see any of it shot?
JJ: That was tricky for me, because the wedding was shot toward the very end of filming, and literally every character except for me was in the wedding. I got to the point where I just started going to the set to hang out. But it was great; I saw everybody dressed up! I'm so glad that I did that, because it was just such a wonderful way to finish filming.