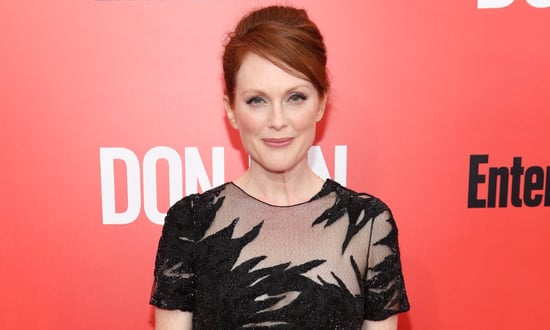 POPSUGAR: How did you get involved in the project?

Julianne Moore: I was reading the scripts that were submitted to me while on a plane, and I read it and it really surprised me. I didn't know where it was going and it was very, very funny and ultimately extremely touching. Then I spoke to [Gordon-Levitt] on the phone and decided to do it.

PS: Had you met him before?

JM: No, we didn't know each other. It was a Skype; that was the first time we met.

PS: Were you surprised when you saw him in full Don Jon mode?

JM: He came to my house to do a little rehearsal and he was very muscular and I was really surprised. He was like, "This is not my normal state of being," and I was like, "OK!"

Get more scoop after the jump.

PS: How about once he was on set as the director?

JM: I really admired the fact that he was so assured and that he set out to accomplish what he wanted to accomplish. A lot of people say they have a movie they want to get out, but he actually did it. It is about something. There's an idea that he's delivering in a very assured and entertaining way, and I think that's so admirable.

PS: Did you have any doubts about the mature subject matter?

PS: Your only scenes are with Gordon-Levitt. Are there other people on the film you wish you could have spent screen time with?

JM: It was really nice to see the movie because I was the first person to shoot, so when I finally saw the movie I was so impressed by the performances. This particular group of actors is really varied. All the performances were so lively and rich. It would have been nice to work with them.

PS: Could you see yourself working with him as a director again in the future?

JM: I think I would. Joe has a great sensibility and terrific taste.

PS: I was surprised by how much pornography was actually shown on screen. Did you know it was going to be that graphic?

JM: There's quite a bit of it. It was in the script.

JM: It does! It says cut to this and cut to that. He was very specific in his language with the descriptive parts and dialogue. He would talk about what would be on screen and how it would be edited. What's cool about the movie is that there are stylistic shifts as well. It starts out controlled, then it gets looser and more realistic.

PS: So given that this movie is pretty graphic, you probably wouldn't take the kids to see it?

JM: Exactly! So I think they would rather not see me.