Big Daddy (Nicolas Cage) may be down for the count, but Kick-Ass (Aaron Taylor-Johnson) and Hit-Girl (Chloë Moretz) are not on their own in the red band trailer for Kick-Ass 2. The trailer for the sequel to 2010's Kick-Ass reveals the superhero duo is hitting the streets again to fight crime in New York City. This time, they have to fight the original movie's Chris D'Amico (Christopher Mintz-Plasse), who's been reborn as baddie The Mother F%&*^r. Good thing they have fellow caped crusader Colonel Stars and Stripes (Jim Carrey) and his loyal canine companion by their side. 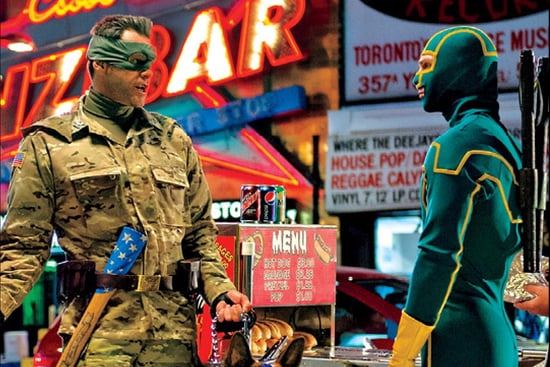 I'm so excited for this movie — Hit-Girl is one of my favorite superhero characters of all time, and now that she's on her way into adolescence, I think her skills (and foul mouth) are only going to get more awesome. I also find that Carrey is at his best playing flamboyant characters like this, and I can't wait to see what he adds to the team. Kick-Ass 2 opens Aug. 16, and you can watch the trailer after the jump.