Daniel Radcliffe keeps expanding his post-Harry Potter career, and in the trailer for Kill Your Darlings, he's getting far, far away from the boy wizard. As 1960s beat poet Allen Ginsberg, Radcliffe is curly-haired and bespectacled in his freshman year at Columbia, where he's studying literature (if you remember from high school, he's the guy who goes on to write "Howl"). At school he meets Lucien Carr (Dane DeHaan), who both entrances him and introduces him to other future literary stars, like William S. Burroughs (Ben Foster) and Jack Kerouac (Boardwalk Empire's Jack Huston). 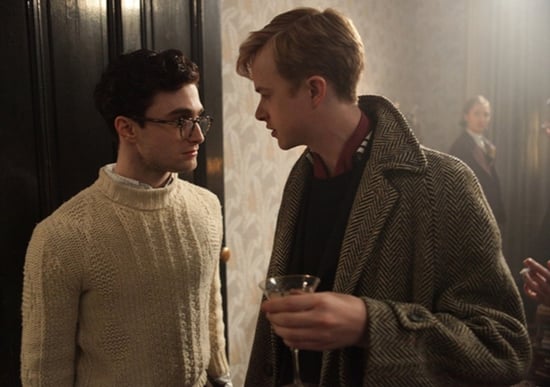 The trailer does take a dark turn about halfway through, and I'm curious about what dangerous misadventures Allen and Lucien get into with Michael C. Hall's character. I'm also excited to see Radcliffe's performance, especially since we know Ginsberg experimented with drugs and pushed the limits of poetry of his day, and I'm constantly impressed with DeHaan's work. Kill Your Darlings opened at Sundance, and it will also hit this week's Toronto International Film Festival The film opens in theaters on Oct. 18. You can check out the trailer after the jump.