I'm so used to seeing Matthew McConaughey in romantic comedy mode, so it's a bit disconcerting to see him as a cold-blooded killer as the titular character in the trailer for Killer Joe. Emile Hirsch plays Chris, a man so desperate for money that he decides to have his mother (Gina Gershon) killed so he can collect the insurance money. He calls on hit man Joe, but since he doesn't have the cash for the deposit, he uses his sister (Juno Temple) as collateral. As you can tell from Hirsch's bloody face, the arrangement doesn't play out super smoothly, and it's not just Chris's mom who's in danger. 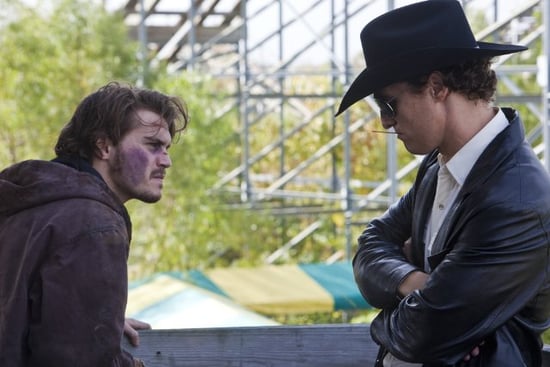 Though the movie is billed as a black comedy, there aren't too many jokes in the preview, but there is as much violence as you'd expect for a movie about a contract killer. I'm assuming the film itself will be pretty graphic, since it recently earned an NC-17 rating (and it's from William Friedkin, director of The Exorcist). Killer Joe comes out June 27, and you can see the trailer when you read more.

Movie Trailers
Blink and You'll Miss the Diabetic Kid in Pixar's Turning Red Trailer, but It Left a Major Impact on Fans
by Kate Schweitzer 2 days ago