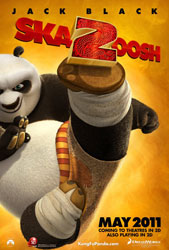 I wasn't expecting much when I saw Kung Fu Panda in 2008, but I kinda fell in love with Po (thanks in large part to Jack Black), and the sweet story of an unlikely martial arts hero who has a soft spot for dumplings. The original film wraps up nicely, but there's a new adventure in store next Summer. In the next film, Po and the gang will head to China to explore Po's background, but you won't get all that from this first teaser for Kung Fu Panda 2. Still, it's worth getting reacquainted with the lovable panda, who has a little game he'd like to play with you. Check it out after the jump.

Jack BlackMovies
Around The Web

Aubrey Plaza
You're Not Alone: Aubrey Plaza Wants People to Root For Riley and Abby in Happiest Season
by Karenna Meredith 17 hours ago