Adapting a bestseller into a movie is never an easy feat, particularly when most of the story takes place on a rowboat in the middle of the ocean. However, Ang Lee's Life of Pi is a great example of how a movie can take a novel to the next level. Thanks to amazing visuals, imagery, and 3D, the movie version of Life of Pi pumps more magic into the impossible tale of a boy, a boat, and a Bengal tiger. 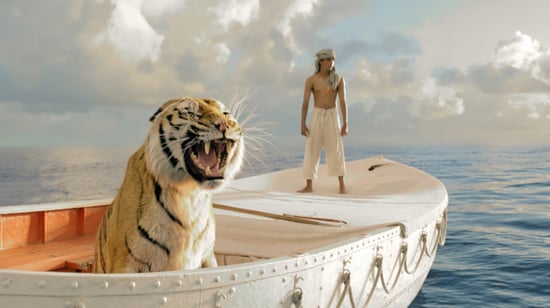 That boy, of course, is Pi, who is named not for the mathematical constant but for a French swimming pool beloved by his uncle. His unique name is just the tip of the iceberg when it comes to quirks; Pi grows up in India, where his family owns a beautiful menagerie — we're talking sloths, tigers, zebras, the works. As a teenager, Pi's parents decide to uproot the family and animals to Canada, but their trip takes a tragic turn when the ship sinks. As the sole human survivor, Pi is left to fend for himself aboard a rowboat with the zoo's resident tiger, Richard Parker. What ensues is a story of endurance, friendship, and the human spirit.

To see what else I thought of the film, just read more.

Religion is a huge part of Pi's life, and thus, it's a recurring theme in the movie. Before the accident, Pi grows up practicing three different religions, much to his father's chagrin. However, he doesn't truly understand the meaning of faith and resilience until he's alone at sea and pleading for a sign. The story shifts back and forth between two perspectives: that of present-day Pi as he narrates the story to a novelist looking for a new idea, and through teenage Pi's eyes as it's happening firsthand. The fact that they we meet older Pi first tells you upfront that he'll survive the shipwreck, but that doesn't make the story any less harrowing. Seeing Pi lose his family in the sea is heartbreaking, and we are right there with him as his faith and beliefs are tested as he tries to stay alive.

Life of Pi is truly magnified by the visuals and 3D, essentially making you feel lost at sea with Pi and Richard Parker. The Pacific seems all the more vast on the big screen, and Richard Parker's treachery is palpable every time the tiger leaps out of the screen and into your face. The special effects are at their best here, and are a key factor in Ang Lee's expert storytelling.

Readers of the novel already know that the story ends on a bit of a dry note, and the same can be said for the film; for a movie that packs so much punch, the ending feels a bit like an afterthought. But it's not reason enough to skip this beautiful film: Life of Pi isn't about the destination; it's about the journey.