Bradley Cooper definitely polishes up nicely in this snazzy new trailer for Limitless. Cooper plays Eddie, a struggling writer (with a really bad haircut) who does a total life 180 after taking a small pill. The drug is like speed on steroids, allowing him to tap into his full brain potential, so he can write faster, stay up later, perform crazy math in his head — you get the idea. But as we saw in the drug's faux ad, there are side effects. Mainly, Eddie's going crazy. 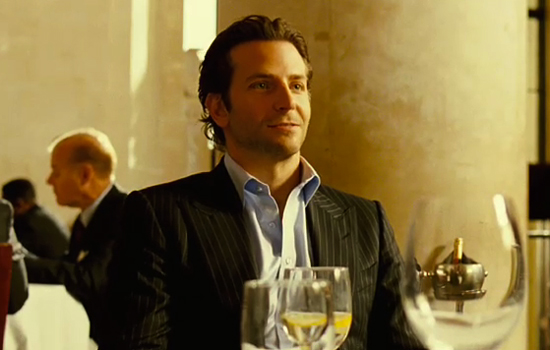 The film definitely has a slick feel to it, as Eddie enters a world of wealth, women, and power (Kanye West's "Power" plays in the background, naturally). But I'm actually more interested in the movie's futuristic, sci-fi aspect. This could be another mindbender, and the camera effects look a little nuts — in a good way. Robert De Niro costars as some sort of business investor, while Abbie Cornish steps in as Eddie's lady love, so the cast is obviously solid. What do you think? The film comes to theaters March 18, but check out the preview when you read more.