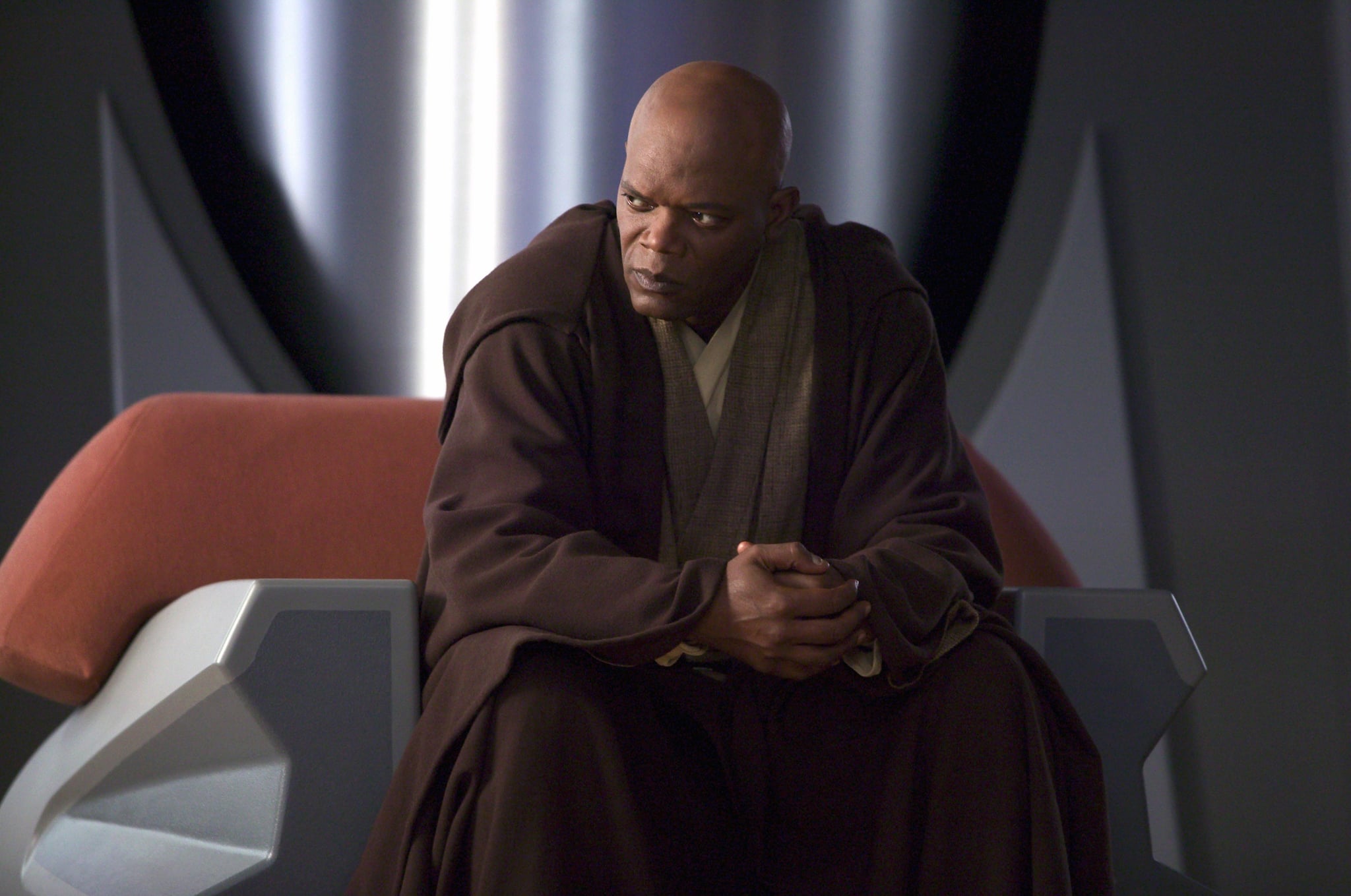 When it comes to the newest Star Wars trilogy, so much is still shrouded in mystery. Since watching 2015's Episode VII (The Force Awakens), our primary focus has been on the main character, Rey. The world at large couldn't stop theorizing about the identity of her parents. Now that we know Episode VIII has been titled The Last Jedi, our minds are spinning even more trying to figure out who the title is referring to. Among all of these questions, one even larger mystery seems to linger: we're talking about the identity of Supreme Leader Snoke. As we consider the suspects, one new theory has come totally out of left field. What if Mace Windu, played by Samuel L. Jackson in Episode I, Episode II, and Episode III, is the mysterious new villain? Let's break down the logic behind the claim.

Jackson stated in a Twitter Q&A in June 2016 that he thinks Mace Windu is alive. "In my mind, he's alive. [Jedi] can fall incredibly high distances and not die." It's worth noting that Mace Windu loses a hand and experiences the full impact of Palpatine's Force lightning before he's flung out of a window to his death. That said, no Jedi has ever died in the series from any of those three types of injury. In fact, some characters have survived falls of even greater distances. If Mace Windu doesn't die in Episode III, there are unlimited options for where he could be.

But How Could Mace Become as Disfigured as Snoke?

As is clearly evidenced in that very same scene, the reason Palpatine becomes so deformed is because of his own Force lightning deflected back at him. It stands to reason that Windu could develop the same horrifying scars and pallor from Palpatine's attack. Snoke's huge head scar could be from Windu's great fall. And, hey, they're both bald. It's worth noting.

Wouldn't He Be Old as Hell, Though?

Yes, but that doesn't mean his survival up through the new trilogy is out of the question. After all, Snoke does say he witnessed the rise and fall of the Galactic Empire, meaning he was around during the first two trilogies. This means he could very well be Mace Windu.

Mace Windu Is in Touch With the Dark Side

Mace Windu notably harnesses the power of the dark side, even in spite of the fact that he's a Jedi knight. Even his purple lightsaber is an indicator that he straddles both sides. The trademark blue of the Jedi could mix with the red of the Sith to get this very color.

So, why would he turn to the dark side? Well, the fact that he's betrayed by Anakin Skywalker may be reason enough. We know Snoke is determined to find Luke Skywalker, and using Anakin's betrayal as a motivating force would explain why. Plus! If you subscribe to the theory that Rey is actually a Palpatine, it strengthens the argument and explains why Snoke is so obsessed with her. After all, Mace Windu would want to get back at Palpatine for everything he does in that supposed death scene.

There are even more layers to this, but that's the gist. If you're interested in Mace Windu's signature lightsaber move, his connection to Finn, and the further involvement with Kylo Ren, this video outlines everything in much more detail:

Is your mind blown yet?