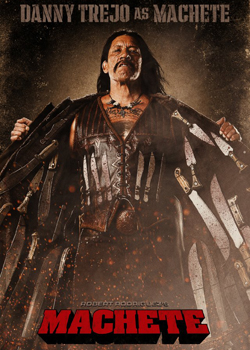 Robert Rodriguez's violent extravaganza Machete barrels into theaters today. Danny Trejo plays the title role, a Mexican badass hired to assassinate an anti-immigration senator (Robert De Niro) when a former employer double-crosses him. Together with a priest (Cheech Marin), a resistance fighter (Michelle Rodriguez), and an ICE agent (Jessica Alba), he goes after his would-be killer to get revenge. Oh, and there's also Steven Seagal and Lindsay Lohan in a nun's habit.

The film looks like pure camp from its B-movie vibe to its weaponry. Rodriguez's style definitely requires a certain cinematic taste, but the majority of reviews are positive. So tell me: will you rush to theaters, or will you sit this one out?

Movies
Waiting For Promising Young Woman to Be Available Via Streaming Site? It'll Be a While
by Amanda Prahl 8 hours ago