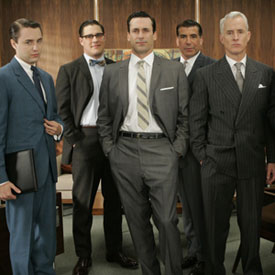 After months of drama, production delays, and negotiations, AMC and creator Matthew Weiner have finally reached a decision regarding the fate of Mad Men. Weiner has signed a three-year deal with the network that will keep Mad Men on the air through season seven. As for the rumors that two cast members will be cut, Weiner has stated that under the new deal, he'll have creative freedom about what to do with his characters (read: nobody's forcibly getting the axe). Though it's still undecided when the series will return, Weiner has made one thing clear: the show will end for good after season seven.

Nostalgia
Dawson's Creek Is Coming to Netflix, but Don't Expect to Sing Along to the Original Theme Song
by Mekishana Pierre 1 hour ago

Schitt's Creek
Etsy Is Selling Schitt's Creek Face Masks, and You Bet One Says "You Just Fold It In"
by Emily Weaver 2 hours ago