Mad Men is finally back this week, and we've jumped about a year forward with the two-hour season five opener. It's a new year, and there are new secretaries, new accounts, and new adjustments in the personal lives of the denizens of Sterling Cooper Draper Pryce. It's the brink of Summer and Don's 40th birthday, and where SCDP was scrambling after losing Lucky Strike at the end of last season, business seems pretty stable now, but as usual, there's still discord within the ranks of the company. 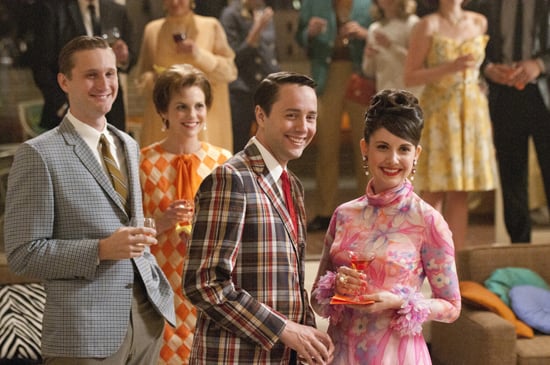 Between bean ballets, French dance numbers, and the party, there's a surprising amount of lightness this week (and an unusual amount of jokes for Mad Men). The episode serves mostly to catch us up with the characters after a year rather than lots of plot development, but there are plenty of mad moments to go over. To see them, keep reading.

I enjoyed this episode even if there aren't major developments just yet, mainly because I've missed the show so much. Also, it helps that everyone is such a jokester this week (my favorite line might be "No, but give Morticia and Lurch my love." Good one, Don.). What did you think of the premiere now that you've caught up with everyone after so long?