Documentarian Morgan Spurlock took on the country's growing health epidemic in Super Size Me and the expansive advertising industry in The Greatest Movie Ever Sold, but now he's tackling an even bigger issue: manscaping. In the trailer for Spurlock's new film, Mansome, Will Arnett and Jason Bateman work with Spurlock to get to the bottom of why men's maintenance has become more important than ever in recent years, with the help of some celebs as well as everyday guys. 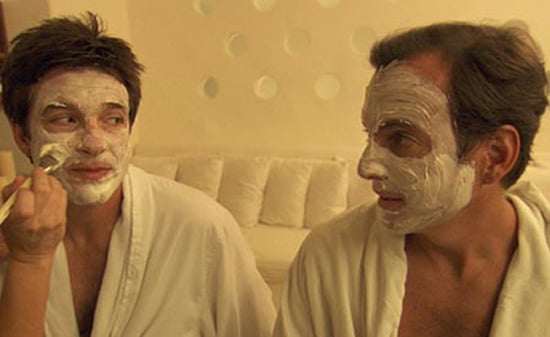 Clearly this movie isn't as serious as the director's previous projects, but it does look kind of hilarious. Arnett and Bateman have perfected their bro-chemistry (thanks to Arrested Development), and I definitely got a kick out of them in mud masks. While I'm still not sure about the balance between funny and fact, I'm happy to listen to Zach Galifianakis wax poetic about facial hair any day. The flick premiered this week at Tribeca, but it won't be open in theaters until May 18. Take a look at the trailer after the jump.

Steven Yeun
We Don't Know Much About Jordan Peele's New Horror Film, but the Poster Offers Some Clues
by Kelsie Gibson 20 hours ago

Netflix
Sexy Movies to Stream on Netflix in August, Because the Only Place You Should Be Is Indoors
by Corinne Sullivan 23 hours ago

Movie Trailers
Blink and You'll Miss the Diabetic Kid in Pixar's Turning Red Trailer, but It Left a Major Impact on Fans
by Kate Schweitzer 23 hours ago

by Corinne Sullivan 59 minutes ago