We've already seen a trailer for The Master, Paul Thomas Anderson's drama about a cult leader and his disillusioned followers. That one is disturbing, but the new trailer is even more creepy. There's a lot of Philip Seymour Hoffman's Lancaster Dodd waxing poetic about what sets man apart from animals, but this time Joaquin Phoenix's character is shown facedown, banging on the window faster and faster as the drama heats up. Oh, and at one point a girl just wiggles her tongue at the camera. 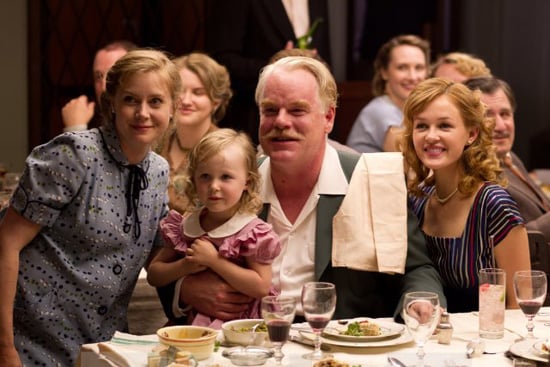 With its intense buildup and dark subject matter, this trailer reminds me a lot of Anderson's last directorial effort, 2007's There Will Be Blood. I'm more excited than ever to see Hoffman as the cult leader, though I'm a little afraid I might get sucked into his charisma. Check out the trailer after the jump.

Amazon
How Fast Can You Guess the Ending of Amazon's The Voyeurs With These Chilling Easter Eggs?
by Chanel Vargas 6 days ago