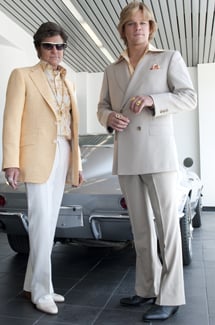 Here's Matt Damon as you've never seen him before: as the feather-haired, leisure-suited-up boyfriend of Liberace (Michael Douglas) in the HBO film Behind the Candelabra. This is the first official look at the actor as Scott Thorson, the lover of the famous musician, and it's quite a sight to take in. I don't even know what my favorite part is — the hair on both men, the sweet sunglasses on Liberace, or the coordinated color scheme of their suits? Either way, I'm looking forward to seeing more of the film, which is slated to air sometime this Spring, not just because I'm interested in the story, but because, well, Matt Damon promised to show his butt.

See a larger version of the image after the jump.

TV
The Powerpuff Girls: Everything You Need to Know About His Infernal Majesty, aka HIM
by Chanel Vargas 1 hour ago

Younger
Younger's Final Season Does Everything Right That Emily in Paris Did So, So Wrong
by Amanda Prahl 21 hours ago