If the first photo of Michael Douglas as Liberace and Matt Damon as his lover in Behind the Candelabra wasn't enough for you, then you're in luck! The pair cover this week's Entertainment Weekly, complete with feathered hair, blingin' rings, and lip color. In the issue, the guys talk about their HBO movie (directed by Steven Soderbergh), their crazy costumes, and awkward sex scenes. Here are highlights: 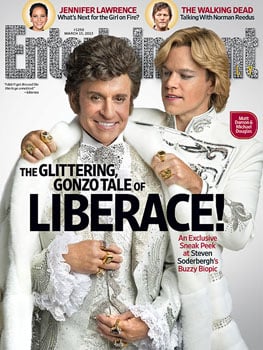 The movie airs on May 26, and you can get a better look at the cover when you read more.

Janel Parrish
Janel Parrish's Hallmark Film, Holly & Ivy, Will Give You All the Feels: "It Has So Much Heart"
by Kelsie Gibson 9 hours ago