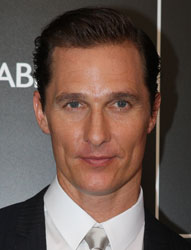 Hilary Swank has quite the choice of hot leading men for her next film. Matthew McConaughey and Josh Brolin are eyeing the same role in Dreams of a Dying Heart, about a solider (Swank) who returns from Iraq to find that not all is exactly how she left it. The male role in question isn't quite specified yet, but it would still be a dramatic turn for McConaughey, who's recently been sticking to romantic comedies and movies like Surfer, Dude. Which actor can you see playing opposite Swank?