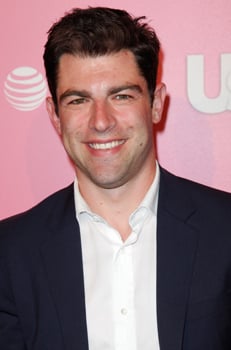 Max Greenfield plays Schmidt on New Girl, a character that has a tendency to be materialistic, inappropriate, shirtless at any given moment. He can also be a sweetheart, thanks to Greenfield's funny, careful portrayal of him. I recently chatted with Greenfield while he was promoting Zevia, an all natural soda with no artificial sweeteners. Zevia has launched a campaign against artificiality, and they chose Greenfield to work with since he's a person who says what's on his mind and, like Schmidt, isn't afraid to be real. With that in mind, Greenfield and I chatted about when Schmidt is being the most real, the relationship between Schmidt and Cece, the sexual tension between Nick and Jess, and how real the show's drinking game True American is.

BuzzSugar: When is Schmidt being the most real?
Max Greenfield: I honestly think he's never not being himself. And that's his best quality and his biggest fault. He's always being real. Sometimes it would be nice if he had a filter every so often.

Buzz: Do you feel pressure to work out because you know shirtless scenes are coming?
MG: Uh, would you? It's terrifying! I'm not one of these guys who's just like, "Yeah I'm ripped. I can eat whatever." I work out so hard. And I work out really hard to get to a decent point. But so easily I could go off and go on a three, four day bender where I'm just throwin' down cookies, bread, sandwiches, and at the end of four days, you're like, "Oh yeah, I can see a significant difference."

Buzz: You also have to wear stuff like tiny bike shorts; do you ever get resentful when you see your costars Jake Johnson and Lamorne Morris wearing jeans and t-shirts?
MG: I don't get resentful toward them. I get resentful every once in a while toward the writers, just because sometimes it's like, "Really, guys?" I'd just like to know this is happening. They're on set and they're watching it, they can see everything. They have seen everything. Our showrunners, and our crew, and everybody else, has seen everything.

To find out what else Greenfield had to say about New Girl, its budding relationships, and the confusing drinking game True American, just keep reading.

Buzz: Are we going to see a dynamic shift with Schmidt and Cece now that they've said they like each other?
MG: There's definitely a dynamic shift. What happens is, a lot of the times in life, you get into a relationship and go make that further push, and as great as it can be, it can also be really scary. And how people react, especially these two characters, to that fear, it can often times be funny.

Buzz: Cece turned out not to be pregnant, but if she had been, what Schmidt characteristics would you have liked to see in their offspring?
MG: His maturity, his hair, and his taste for interior design.

Buzz: Before Schmidt and Cece started hooking up, Schmidt and Jess almost did. Do you think if Schmidt and Cece stopped, Schmidt would ever try anything with Jess again?
MG: I think he definitely looks at Jess as just a sister. I think he had a moment with her where it was like, hey maybe. But I don't 100 percent see it happening. It would be weird.

Buzz: Maybe like a one-night stand.
MG: Yes, I could see that happening. And the two of them being horrified afterward, like, "What did we do?!"

Buzz: And there's obviously sexual tension between Jess and Nick. How would Schmidt react if they got together?
MG: I think he'd be thrilled. I think Schmidt, a lot of the times, especially with a situation like that, is looking at it like the audience does. I think he's kind of going, "Oh yeah, I see that coming."

Buzz: Do you think Schmidt is aware of the tension between Jess and Nick?
MG: You know, we've never really discussed it. But I would assume he is. It would be hard not to be.

Buzz: Can you explain the drinking game True American?
MG: So a writer of ours, Luvh Rakhe, wrote that episode. He knows all the rules to True American. He knows the game very, very well. He didn't tell us a lot about it, he just kind of gave us direction, but he has all the rules in a lock box somewhere. He will give them to you if you talk to him, but he won't reveal them to us.

Buzz: Schmidt has a lot of similarity to Parks and Recreation's Tom Haverford. Do you think they'd be friends in some cross-network universe?
MG: They would be friends in any universe. And be happy to be friends. I had dinner with Ben Schwartz the other night, who plays Jean-Ralphio. We took a picture, and people went nuts. They're like, "Oh my God, Schmidt and Jean-Ralphio, what do we do?!"

Buzz: Is Zevia something Schmidt would drink?
MG: Oh yeah. Because it's trendy.

Buzz: How did you get involved with Zevia?
MG: I'd been working out a bunch for the show because I take my shirt off all the time, and I was drinking regular soda. And then a buddy of mine was like, "You can't do that." I'm not very good at dieting, nor do I really know how to do it. And I was like, "But I like soda," and he turned me on to Zevia. It was so cool when they called, and they were like, "We'd like for you to be a part of this," and my manager was like, "Have you heard of this company Zevia?" and I was like, "Oh my God, yes." I was like, "I love that." So it was one of those nice moments where a product calls and you're like, "Yeah, I love you guys, let's do it."