My first panel at Comic-Con, Megamind, kicked things off right: with humor, mystery, and costumes! The animated film from Dreamworks caught the audience by surprise when star voice Will Ferrell showed up on stage — covered in blue face paint and dressed as the title character. He was joined by costars Tina Fey and Jonah Hill, and as the room waited with bated breath to see if Brad Pitt would show up . . . he did! A cardboard stand-up of him, anyway. 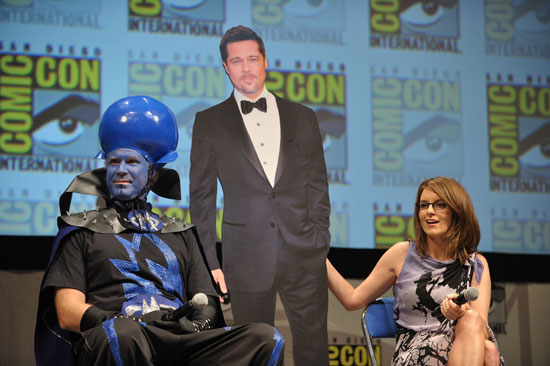 Still, Ferrell, Fey, and Hill had no problem warming up the morning crowd without him, cracking jokes about the convention and introducing a few minutes of the movie. I have to say, I was pleasantly surprised by what I saw — as director Tom McGrath said, it's Dreamworks's first superhero movie and the concept turns the genre on its head. While Brad Pitt voices Metro Man, Will Ferrell plays his nemesis, villain Megamind, who bests Metro Man early in the movie and then has to figure out what to do with his new power. Fey's character is the cute reporter on the case, and Hill is a dorky cameraman (with a twist!) who takes a shine to her.

Each actor had a chance to comment on their character and bust out one-liners, so to hear what they had to say about Megamind, plus see tons of photos, just read more.