Melissa McCarthy took home the Emmy Award for best actress in a comedy during this evening's show, and she stepped back into the press room with a big smile on her face. Melissa, who actually designed her own dress, made a big name for herself with her hilarious role in Bridesmaids earlier this year, and she spoke about her infamous puking scene in that film. Melissa also revealed the mastermind behind the best actress pageant stage stunt, and why she said yes to doing it before she even heard the idea. Here are the highlights, and check out all the Emmy Award winners here: 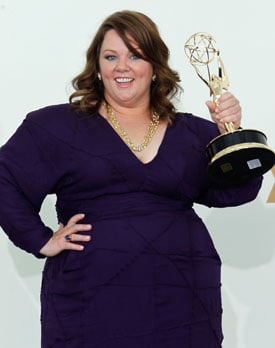 Whose idea was the nominees getting up on stage? I heard it first through Martha, but she said 'Amy has this idea . . .' and even before I heard it I was like, I'm in. If Amy Poehler thinks something's funny, I'll do it.

You've done for puking what Jim Carrey did for farting in movies. What politically incorrect bodily function is next on the menu? I'm hoping to just go down the list. I'll actually go off that, or make a career of it. I'm just happy people went to go see [Bridesmaids].

Do you have any advice for aspiring actresses in Plainfield, IL? I do. I think if anyone tells you the odds are slim, just keep walking. Just do whatever the hell you want to do, because they don't know what they're talking about. When you love something, and you work really really hard at it, you can do it.

What do you think people identify most with when it comes to Molly? I think people really identify with her because she's relatable. She's not a teacher by day and superhero by night. She's just a teacher, so people can relate to that. I love that Mike's character wasn't superpowered cop, he's just a cop. I think people watch it and think 'oh my god that's me,' or that's my sister or that's my cousin. It's so fun to watch people you can relate to who trip and fall along the way, who are so flawed.

To read more from Melissa, including her plans to make her Emmy into a necklace just read more.

What did you mean in your speech when you said that Chuck Lorre "fought for you"? I said that? I literally might have just said a list of numbers. I do not remember what I said. Because this is my first lead, and I think that was a line to cross. I don't think it was oh, of course, put her in the lead. I've never done this before, and I think he really fought for me. I think he really went to bat for me.

Did you see yourself that way? Sure! I was always like, give me a bigger part! It's more challenging. Week to week, it's more complicated to figure out. I like the math of acting sometimes when you have to figure it out: where is the character going?

On the carpet you said that you designed your dress? I did! I designed it, and I worked with an amazing couture dressmaker. I didn't see anything that I really liked out there. I went to college and studied textiling to design women's clothing. It's wildly comfortable and it has pockets, which I enjoy.

With your cousin Jenny, how is this Emmy going to play at the next McCarthy family reunion? Well, when I fashion it to my necklace, I'll just be wearing it in. I think there's a lot of McCarthys in Illinois rooting for me. We're a loud, close family, so I think this will play pretty well.

The weight issue seems to have become pretty irrelevant to Mike & Molly. What are your thoughts on that? It was never about that for me. The funny thing is, at one of the first press conferences [one of the writers] was like, 'I'm writing a romantic comedy. Why are all the questions about weight?' We knew those questions were going to happen to start, but if they were still happening 10 episodes out we're in trouble. Luckily that was not the case. It's just a comedy that I love deeply.