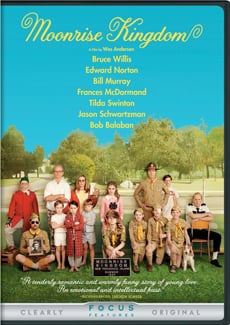 Wes Anderson's latest has a love struck Boy Scout (Jared Gilman) running away with the daughter (Kara Hayward) of two quirky lawyers (Billy Murray and Frances McDormand). Despite a search party led by a staunch scoutmaster (Edward Norton) and the town's sheriff (Bruce Willis), the two adolescents continue to elude the adults. Though the residents are isolated on a small island, the retro 1960s vibe still saturates the film's aesthetic. Many elements might be familiar to Anderson fans, but it's still a pleasure to watch. Featurettes, including a tour around the set with Bill Murray, are included on the DVD.

Adam Sandler and Andy Samberg join forces for a broad, obnoxious comedy about father-son bonding. Donnie (Sandler) shows up days before his estranged son's (Andy Samberg) wedding, hoping his successful kid will be the key to solving his financial issues. Over the course of the weekend, the two reconnect, but not before a series of gross-out stunts and hard-to-watch bodily fluid gags. Leighton Meester and Vanilla Ice also star. DVD extras include a gag reel, deleted scenes, and three featurettes.

Madagascar's colorful cast of exotic animals is back for the franchise's third film. This time, the animals, voiced by Ben Stiller, Chris Rock, David Schwimmer, Jada Pinkett Smith, and Sacha Baron Cohen, among others, embark on a comical trip through Europe as they try to return home to New York City. They encounter a number of challenges, and end up doing a short stint in a circus. Due to spot-on timing and frenetic energy, this installment might be even better than its two predecessors. DVD extras include commentary, deleted scenes, cast bios, and two featurettes.

Movies
Travis Scott Has a New Album and Movie on the Way, and We Are So Ready
by Kelsie Gibson 7 hours ago