The trailer for The Mortal Instruments: City of Bones rethinks the classic image of angels and gives them a modern makeover. Lily Collins (Mirror Mirror) stars as Clary Fray, the heroine of the movie based on the bestselling book. In the wake of her mother's (Lena Headey) disappearance, Clary is confronted with a harsh truth: like her ancestors before her, she's half-human and half-angel, a combination known as a Shadowhunter. Her job is to protect the human race from demons that threaten the planet. Understandably, she's not thrilled about it, especially when her new Shadowhunter ally Jace (Jamie Campbell Bower) introduces her to the Downworld, a mysterious and deadly place located below her home of New York City. 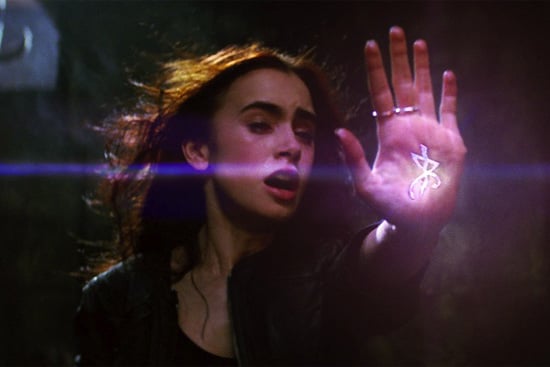 First her mom goes missing, then she finds out her sole purpose in life is to fight terrifying demons? That's a bummer. Though if anyone can handle it, I'd peg Lily Collins for a fighter. This is just the first chapter in Cassandra Clare's Mortal Instruments series, so if it's any good, you can bet on seeing more cities (like those made of ashes, glass, and fallen angels) on the big screen as well. It opens Aug. 23, and you can watch the trailer after the jump.

Halloween
Lydia, Is That You? This Beetlejuice-Inspired Wedding Is Straight From the Afterlife
by Haley Lyndes 16 hours ago