NBC brought a full night of all-new episodes this week with its Thursday night lineup, and while it was comedy as usual, there were also some momentous events. Community took on Pulp Fiction in its much-anticipated tribute ep as they celebrated Abed's birthday, and the folks of Perfect Couples went on their respective bachelor/bachelorette trips (though it was bittersweet knowing that the series isn't coming back next season). 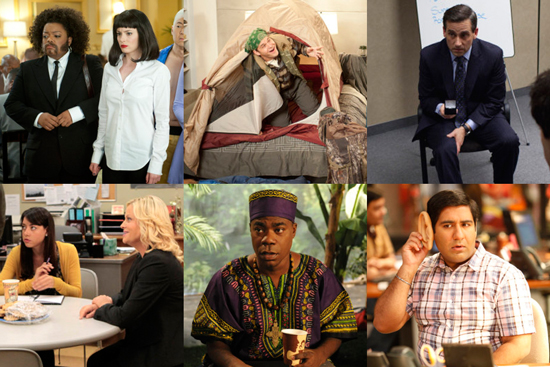 Leslie and the gang went on an ill-fated camping trip to breed ideas on Parks and Recreation, but perhaps the sweetest — and biggest deal — happened on The Office as the Dunder Mifflinites helped Michael propose to Holly . . . and learned they were going to say goodbye to their boss. The denizens of 30 Rock panicked as TGS went on a forced hiatus in Tracy's absence, and Todd encounters workplace drama on Outsourced. I have to say, though it was an all-around great night on NBC, The Office is my pick this time around, given that Michael and Holly's storyline was so sweet. Your turn — if you tuned in to the peacock network Thursday night, it's time to vote for which of the shows you thought was funniest!

TV
20 WandaVision Finds So Cool, Even Agatha Harkness Can’t Ruin Them
by Anvita Reddy 7 hours ago

Netflix
The Irregulars: Every Star Slated for a Role in Netflix's Sherlock Holmesian Drama
by Amanda Prahl 7 hours ago

Netflix
Can't Wait For Raising Dion Season 2? Here's a Peek at the Cast
by Amanda Prahl 8 hours ago