Thor hits theaters this Friday, and one of my most memorable moments from last year's Comic-Con was when I had a chance to sit down with the cast to talk about the blockbuster comic book adaptation. Natalie Portman and Kat Dennings talked about what it was like to work with each other, along with Chris Hemsworth and director Kenneth Branagh. Then, Hemsworth talked about taking on — and bulking up for — the role of the God of Thunder. 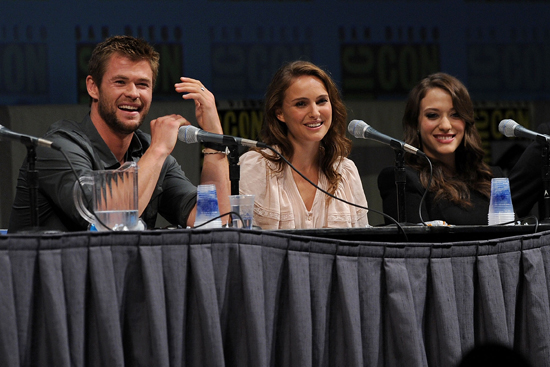 How did Chris Hemsworth stack up as Thor?
Natalie Portman: Chris is fantastic. He is truly, truly talented. He can do anything. He's got a great sense of humor, he's got great emotional depth. He's a very, very smart guy and he's so nice. He's truly, genuinely, a wonderful person. He's exactly the kind of person who can handle this situation. Because you know it's a big, big deal, and he's able to have perspective, know what it is, and he's so kind. He's just a really great guy.

Kat Dennings: He's got a good family. We met his parents — they're lovely. He's just a good person.

To read more, including what Chris Hemsworth had to say, just read more.

What was the experience of working on such a large-scale action movie like?
KD: Well, it's certainly the hugest thing I've ever been a part of, in pretty much every single way. I've worked with amazing people, but I really idolize Kenneth Branagh — for a really really long time — so it was pretty crazy to actually be able to work with him. I mean, we had a table read, and Anthony Hopkins was there: What?! The caliber of actors in this movie, including Ms. Portman, is just pretty much a dream for me and the most exciting thing, in a different way than I've been excited about other things, in a stars-in-my-eyes kind of way.

Were you intimidated?
KD: Yes, I was, but quickly made comfortable by my friends. And Ken, who is the most gracious, loving, supportive director you could ever, ever work with, so it quickly went away.

Did you and Kat know each other before?
NP: Yes. It was a great, great gift that we got to work together. It was really lucky. It was a fun movie to begin with, and it amplified the fun by a million.

This is your first movie in 3D; how does that feel?
NP: Everyone's going to know how flat-chested I am now! It's going to be evidence.

What's it like being involved in such a big project?
Chris Hemsworth: It's a combination of daunting and exciting. You come onto something that has a pre-existing fan base for many years, people know more about your character than you do, which you don't usually do as an actor. You want to make sure you pay homage to those guys and respect it, but also introduce it to a new audience in the right way.

Can you describe your physical transformation for Thor?
CH: I put on a lot of weight — I put on about 20 pounds at one point. It was purely eating, eating, eating, working out and working out, trying to sleep as much as you can — that's the other third of the equation. The eating was the biggest thing; since stopping shooting I probably work out the same but don't eat as much, and I've probably lost 15 pounds or something. Chicken breasts and protein shakes, boiled chicken . . . clean meats, the right carbs. Sickly stuff.

How was it working with esteemed director and actor Kenneth Branagh?
CH: He's incredible. The first play I ever did was Much Ado About Nothing, so we all studied his film over and over again, so to come full circle and work with him now is incredible. Ken is one of the [first] people I'd ever been challenged [by] . . . changing things, doing it differently. It really gets you out of that bad habit of saying "Oh no, my character only does this." I think when you lead yourself like that you limit possibilities, and Ken was all about experimenting and just going for it and taking that risk.

What was it like seeing the trailer for the first time at Comic-Con?
CH: It was crazy, a nerve-wracking experience being on that stage. I felt like a fan sitting there watching this thing come to life.

What are the Thor monsters like?
CH: There's the frost giants — big ice monsters — [there's a] huge battle there. Thor is a God throughout the nine realms fighting monsters, and then there's Thor on earth as a human fighting humans, so it was nice to figure out the two fighting styles and how strong is he here, and weak here.

CH: In the beginning I had a bunch of [Thor] comics, and someone would give me a Thor doll as a joke, and a hammer, and I had all these things around my house. My manager gave me a record of the Thor soundtrack from years ago. And I'm like, wait a second; I'm playing this guy, I can't have all this around my house. I'll make a fool of myself. So I boxed it away and gave it to someone else.