In The Next Three Days, Russell Crowe's character, a professor at a local community college, discusses the use of logic in Don Quixote with his students. Is lack of logic actually better than logic itself? The film sure thinks so, as it weaves together an intricate plot that sinks deeper and deeper into the absurd as it drags on. There's entertainment value along the way, but the more implausible the story gets, the more it loses its audience. 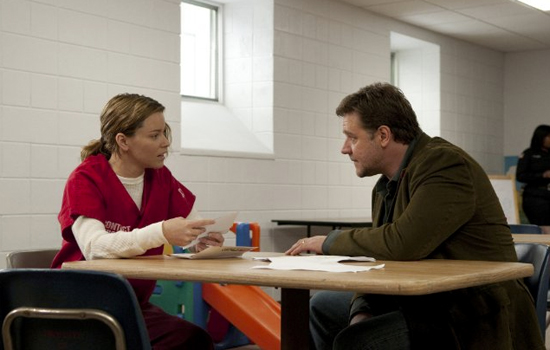 Based on a French thriller, the film follows John Brennan (Crowe), the perfect husband to his wife Lara (Elizabeth Banks), and father to their little boy. John and Lara are the ideal couple, so in love with each other that they still find time to sneak in sex in the car after dinner dates. Then one morning, the police rush into their house to arrest Lara for murder, and their happy life comes crashing down. For more on the film, read more. 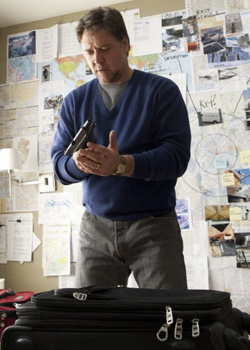 Lara has been charged for the murder of her boss after the two women had had a public scuffle at the office. When the boss lady turns up dead in the employee parking lot (and Lara is seen driving away), things appear fairly incriminating. But despite the evidence, John refuses to believe that his wife is guilty. He tries to get her out of jail the legal way, and when that doesn't work, he plots her escape with a few tips from an ex-convict (Liam Neeson).

When the story first begins, John doesn't even know how to load a gun. But as his plotting gets more elaborate, he's nearly driven insane by the dream of his wife's freedom. He abandons rational thought to do whatever it takes, even if it means having blood on his hands. Yes, people will go to great lengths for love, but when the audience isn't even sure of Lara's innocence, it doesn't make John look noble — it makes him look crazy.

Crowe and Banks both give it their all here, bringing more genuine emotion to the story than it perhaps deserves. The film does have a nice helping of suspense (no doubt thanks to director Paul Haggis), and like John, you're bound to get a little caught up in the madness of the escape. But be warned: you'll have to abandon your sense of logic at the door. John pulls off his scheme with such a degree of expertise that you'll wonder when the ordinary suburban husband started resembling Jason Bourne. What's worse, John's questionable tactics make it harder to root for him. As he and Lara inch closer to their happily ever after on the lam, I wasn't cheering them on anymore. Rather, I was questioning if I still cared.