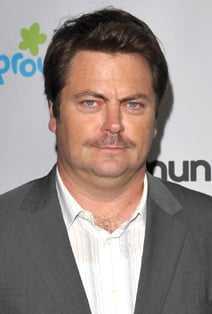 On Parks and Recreation, Nick Offerman plays one of the show's most fascinating characters: Ron Swanson. The curmudgeonly government official loves every kind of meat, barely tolerates people, and hates his same-named ex-wives. Over the course of three seasons, Offerman has managed to make Ron hilarious and surprisingly likable. He and series creator Mike Schur recently chatted with reporters about the upcoming season of the show, and Offerman revealed some details about himself that rival Ron's persona.

To find out what other delightful details Offerman revealed about himself, just read more.