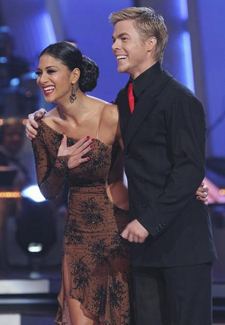 Let's dish about the finale of Dancing With the Stars! I mean, is it possible to be surprised and not surprised at the same time? From the get go, I predicted that Nicole Scherzinger and Evan Lysacek would make it to the final two, but I never thought Scherzinger would actually take it like she did. I mean, she's already a professional dancer! And while she may be the most skilled on the show, doesn't that seem a little, well, unfair?

Truth be told, I thought Erin Andrews might pull off an upset after her performance this week, and the audience seemed to like her and her little — OK, big — flirtation with Maksim. But even despite Andrews's charm and Lysacek's smooth moves, Scherzinger still took home the giant disco ball. Do you think she was the best pick?

The Bachelorette
The Clare Crawley Backlash Has Begun, but Does the Bachelorette Deserve the Criticism?
by Amanda Prahl 53 minutes ago