The Vampire Diaries cast stopped by San Diego for Comic-Con to talk about the upcoming season of the show and what's next for their supernatural characters. Nina Dobrev, who plays human Elena and vampire Katherine, sat down to chat with reporters before her panel. She gave some insight about her two roles, and Elena's constant struggle between Team Stefan and Team Damon. 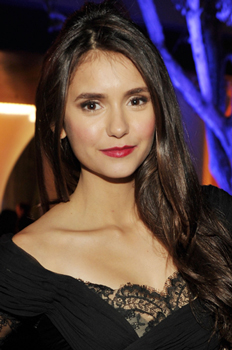 Who do you like playing more, Katherine or Elena?
Nina Dobrev: I definitely enjoy playing both, because there's never a dull day. The great thing about television is that it's not [just] two hours where you have a beginning, middle, and end, [where] you see one character and one thing that they go through. Fortunately, the characters get to grow. I mean, Elena — the way she was when I first started, when I first signed on to the show — she was one person; she was a sort of younger, naive, sad, young girl, and she's become a strong woman. And when I later found out that I would have to play Katherine as well, it was interesting to create another character. I really wanted to make her completely different, and make her so that you could distinguish between the two of them. So that's been the biggest challenge, and it's been great.

Will Elena go for Damon now that Stefan isn't around?
ND: You'll see in the first episode that she may not necessarily be skewing towards Damon. Just because he's there and Stefan's not doesn't mean that she's going to fall into his arms. She realizes that she was in big trouble when she found out that Damon was going to survive after she kissed him. She was like, uh-oh. He's going to follow me and keep telling me about this forever; it's going to be so frustrating. We'll see what happens; it's either out of sight, out of mind, or absence makes the heart grow fonder.

To find out who Dobrev would choose in real life, just read more.

Of Damon and Stefan, who would you, Nina Dobrev, pick?
ND: God, I don't know. I'm pretty sure there's another brother somewhere. A hybrid of the two of them. I don't know; I think Elena's got it good — she's got both of them after her. She gets both. She's a smart woman!

Is it difficult switching back and forth from Katherine and Elena?
ND: It definitely is more difficult because it's a process. You always hear of an actors' process, and it's sort of weird, but we definitely have them, and you have to go through your tics. A lot of the physical changes are what help me. When I look in the mirror, I just feel different when I'm Katherine or when I'm Elena. My voice changes a little bit, I think, and even just mentally, I feel like I can get away with a lot more. I think differently; I get a little more sassy when I'm on set when I'm Katherine, or I'm a little bit more reserved and Elena-esque otherwise.

What did you think when Elena almost become a vampire at the end of season two?
ND: I was happy that she didn't become a vampire. I think it would have been too soon. I feel like we would have burned out of storylines, and then what would we do in season six? From a character and story/show point of view, that's what I think, but also, I don't think she's ready for it. I don't think it's something that she wants. And it's not something I want, because like I said, I get the best of both worlds: I get to be a vampire and I get to not be a vampire, so I kind of like that. That'll be water that we tread further down the line, hopefully.