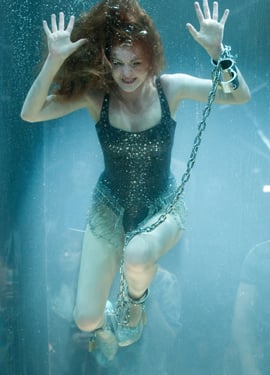 Isla Fisher, Woody Harrelson, Jesse Eisenberg, and Dave Franco star in this month's Now You See Me, a story of four magicians who perform mind-blowing illusions (like robbing a bank in Paris from Las Vegas). The visually impressive film has equally impressive motion posters, one for each of the main characters, and we have an exclusive look at the one for Fisher's character, Henley, who's also known as "the escape artist." The motion poster, which you can see after the jump, features Fisher in one of the movie's coolest scenes, where she tries to escape from a water tank. Be sure to catch Now You See Me when it opens May 31, and see the poster in all its moving glory after the break.