Hollywood has seen its share of movies about magicians, but a movie about magicians who are also bank robbers? Now that's something new. In the trailer for Now You See Me, Jesse Eisenberg's character leads a group of illusionists (including Isla Fisher, Woody Harrelson, and Dave Franco) in a grand showcase of their talents — and let's just say they've got a lot more than card tricks in their bag. In a Robin Hood-esque turn, the team successfully manages to rob a bank during the show and showers the audience in money. Not everyone is impressed, though, and a couple of FBI agents (Mark Ruffalo and Mélanie Laurent) are determined to take them down. 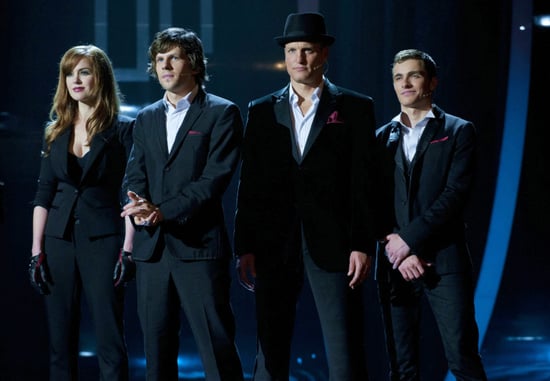 The trailer is fresh and different enough to get me excited about this movie, especially since it features some of my favorite underrated actors (along with ones we all know and love). I'm also glad to see Eisenberg playing something other than the twitchy geek we've seen him play so many times before, and he actually appears to be pulling off cockiness here. The film hits theaters next Summer, but check out the trailer when you read more.

Lady Gaga
The House of Gucci Posters Could Say I Have Terrible Taste in Fashion, and I'd Say, "Thank You"
by Grayson Gilcrease 4 hours ago