Ryan's up to another scheme on The Office this week, and his fellow employees are backing him 100 percent — at least at first. He's trying to sell his startup, WUPHF.com, a site that connects all of your social networks under one umbrella. Unfortunately no big businesses are biting to buy it, which puts its investors (i.e., Pam, Darryl, Andy, and others) in a pickle. If Ryan doesn't find a way to sell it within nine days, they'll all be out of money. 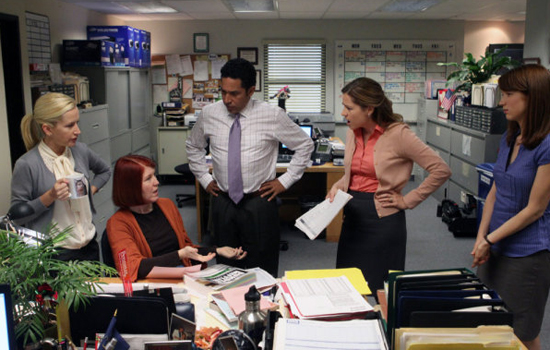 While Ryan's plotting his new venture, Dwight is busy with a side hustle of his own. He's set up "Hay Place," a makeshift hay theme park, in the Dunder Mifflin parking lot. Angela tries to get his attention to "fulfill" their contract, but Dwight's so caught up in hay rides that Angela chats up a new guy instead (guest star Jack Coleman). Jim would like to make some money too, but since he's hit his commission cap, he can't profit off new sales. So instead, he turns his attention to pranking Gabe (I love prankster Jim!).

I didn't really find this episode that funny, but then again, Ryan's never been one of my favorite characters. Even so, I'm curious what might become of Angela and her new beau. Let's go over some of the evening's best lines when you read more.

Did you like the episode? Do you think Angela has a new love interest in her future? Share your thoughts below or head over to The Office community group!

Madison Bailey
Madison Bailey Trades in Her Casual, Surfer-Girl Style For This Electrifying Versace Skirt
by Sarah Wasilak 2 hours ago