This week is the season finale of The Office, and Dwight puts on a family portrait studio for his co-workers, but it's really to prove that he's the father of Angela's baby. Andy comes in looking absolutely crazy, but we learn that our old friend David Wallace has decided to buy Dunder-Mifflin from Sabre and give Andy his old job back. Darryl makes his affection for Val very clear to everyone — including her current boyfriend Brandon. 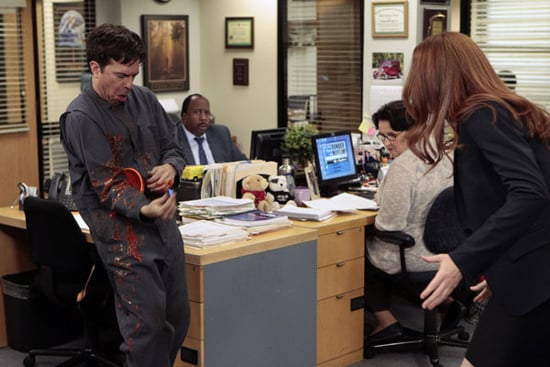 After Andy gets drunk at the office and begs for any work, Catherine lets him clean the carpet, but Andy really just wants to be there when David announces the changes. Before he shows up, Andy spills the beans and tells everyone he's gotten his old job back. On a more adventurous but completely unrelated note, Dwight and Angela make out, and Val makes a grand gesture to show that she's into Darryl. The season finale has a few great quotes, so keep reading for my favorite lines.

What did you think of the season finale of The Office? Share your thoughts below!

Image Source: NBC
The OfficeTV
Around The Web

Books
Obsessed With Lovecraft Country? Here Are 15 Books That Are Just as Thought-Provoking
by Camila Barbeito 6 hours ago