After a great cold open where Ryan tries to show off how seriously he's mourning the loss of Smokey Robinson, in this week's episode of The Office, we spend a little time at work before everyone heads to a big fundraiser thrown by Angela's senator husband. Darryl and Nellie can't seem to connect, and we learn that everything is not that positive for Andy as he adjusts to life without the office. 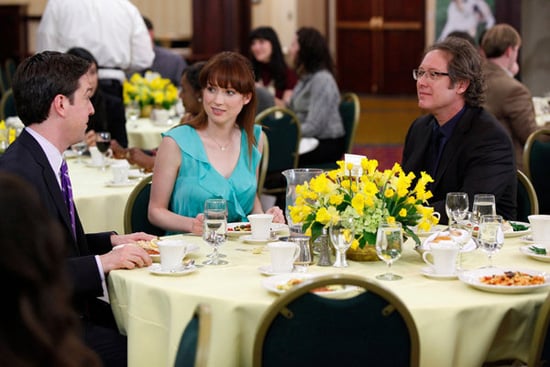 Things are a little darker on the show tonight; I couldn't help but feel for Nellie, and Andy is just feeling lost. Darryl's not even pretending to like Nellie, but once they're seated together at the fundraiser, he warms up to his new boss and teaches her how to eat her very first taco. In a sweet moment, he tells everyone that he understands how "she's trying." Andy adopts a dozen dogs in an attempt to one-up Robert California's grand gesture of buying two tables at the fundraiser, but finally admits he's in trouble. Dwight doesn't understand how a silent auction works and gives an enormous donation — topped off with an epic speech, while Oscar and Pam get in some quality gossiping time about the senator's sexual preferences. This week's episode has its moments, so for my favorite lines of the night, just keep reading.

What did you think about this week's episode? Chime in below!