Olympus Has Fallen, the latest from Training Day director Antoine Fuqua, is unflinching, unsettling, and a solid action film. Gerard Butler stars as Mike Banning, a former aide and good friend to President Asher (Aaron Eckhart). Their relationship has been strained since an accident that claimed the first lady's life resulted in Mike's transfer to another department. Yet when the White House is the subject of a brutal attack from an extreme North Korean political group, it's Mike who braves snipers and infiltrates the capitol building in an effort to save the president and his young son. Mike's plentiful hero stunts aside, it's the way Fuqua orchestrates the complex coup that makes the movie feel uncomfortably real. 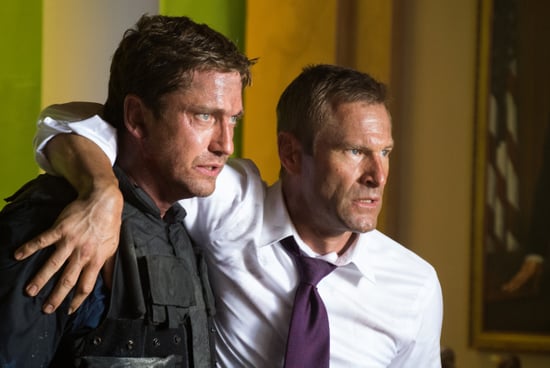 The film primarily takes place in three places: the bunker where the president is being held, the halls of the White House where the returned hero Mike is roaming, and the off-site safe room where the acting president (Morgan Freeman) and his staff (including Angela Bassett) are grasping the reality that the president's blood will be on their hands if they don't negotiate with the terrorists. It's a clever separation, and the isolation of the three units creates even more tension. To see what else I liked about Olympus Has Fallen, just read more.

After an eye-popping attack sequence, the president and his staff are captured by hundreds of skilled terrorists. It's a menacing and unsettling scenario, especially because it only takes the terrorists 15 minutes to execute a full-scale takeover of the White House. The action doesn't stop after "Olympus has fallen" (code for "The White House has been taken") is uttered; it continues steadily throughout, keeping the audience on its toes. At the heart of it is Butler, representing the red, white, and blue like a true patriot by gliding through secret passages, disarming faceless gunman, and saving the day with impressive determination. Eckhart makes for a solid president, devoted to his only child yet imprisoned with no way of communicating with his son (who has eluded the terrorists and is hiding somewhere within the walls of the White House) or his team.

Fuqua succeeds in creating an intensely packed action film with Olympus Has Fallen. With Butler on hero duty and a bevy of explosions and unfriendly fire, this is good, old-fashioned action done right.

by Alessia Santoro 8 minutes ago