Once Upon a Time's midseason finale airs this week, and the show won't be back until January. If you're as excited as I am to find out how the first half of season two wraps up, then I've got some great scoop for you from my recent visit to the Vancouver set as a guest of Disney. Cast members like Jennifer Morrison, Ginnifer Goodwin, and Josh Dallas spilled about what you can expect from the finale, which will find Mary Margaret and Emma trying to get out of Fairy Tale Land, with Cora and Captain Hook right on their tail. Read on to hear what the cast had to say! 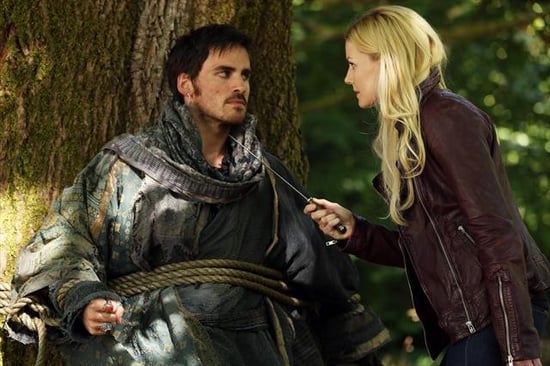 1. Cora is the biggest threat right now.
Robert Carlyle (Mr. Gold/Rumpelstiltskin): "I think she's just bad news. She's bad news to have around; she's nasty. I think that Rumpel is about himself, but I don't think he's necessarily world-domination-nasty and I think that Cora probably is."

Lana Parrilla (Regina/the Evil Queen): "[Regina] is terrified. It's her worst nightmare. Think about what [Regina] has done to Cora. We only know some of what Cora has done to her. We have to think that Regina has banished her mother and sent her to another land, pushed her through a mirror, and just got rid of her, and tried to kill her."

Josh Dallas (David/Prince Charming): "I think Cora is the one to watch out for. She's superpowerful. Gold's going to have his work cut out for him, for sure."

2. But Captain Hook might be just as bad.
Colin O'Donoghue (Captain Hook): "He [Captain Hook] will use whatever means necessary to get his own way. He’ll have no problem being a charming gentleman to one person and be completely ruthless with another. That's the way he is. I think he's not necessarily outwardly evil, but he's definitely self-serving, completely."

Jennifer Morrison (Emma): "I feel like you should understand that obviously I couldn't trust him. I'm just saying."

Get one more from my Once Upon a Time set visit after the jump.

3. This isn't the last of Mulan and Aurora.
Executive producer Steve Pearlman: "They've got to find Prince Phillip, and that's kind of where we leave them at the end of episode nine. They're going to go find Prince Phillip because they've heard that you get the soul back out of the wraith after the wraith has eaten them."

JM: I really enjoyed working with both Sarah Bolger and Jamie Chung [who play Aurora and Mulan], and not to say that they're not going to be back in different ways, but the four of us will never be in the forest again and have a nine-episode journey in the forest again. We just had a lovely time."

Netflix
Netflix's Ratched Takes Place in Lucia, CA, but the Depiction Differs From the Real-Life Town
by Brea Cubit 11 hours ago