The Originals are starting to come into their own, but we can't let them forget where they came from, now can we? This week we saw the second episode of the new series, but instead of just telling you what happens, I'm going to let our old pals from The Vampire Diaries join in on the fun. 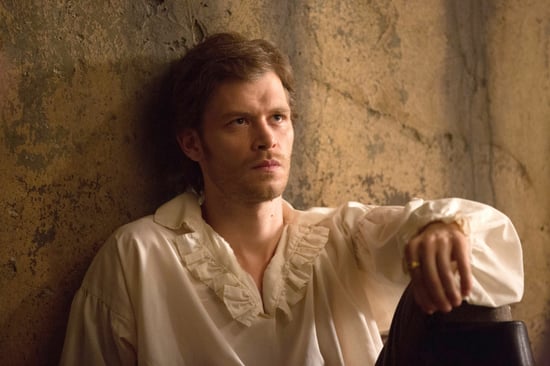 Here's where we're at: Hayley is pregnant with Klaus's werewolf-vampire baby, Elijah is missing, and Marcel is running New Orleans. Let's go over all the big events with GIFs from TVD!

When Rebekah Shows Up

Good luck, New Orleans! If there's one Original I don't want in my city, it's Rebekah. The girl is fierce, and more importantly, fiercely protective of her family — even when she hates them.

Get the rest after the jump.

When Klaus Shoots Marcel's Owner in the Head

Murder is never OK, but I have no pity for the cruel slave driver. Mostly I'm just curious as to why Klaus chooses Marcel to take under his wing. Clearly the kid is getting a beating, but during that time period, Klaus must have seen plenty of that happening. Why Marcel?

I get it; having a little hybrid growing inside of your "tum" would be really creepy, but that's Klaus's baby! Sure he's a little rough around the edges, and getting immersed in the whole vampire world isn't awesome, but that kid is a powerful bargaining chip, and possibly the only thing keeping Hayley alive. Killing the little guy (or girl) would just be dumb.

When Rebekah Rips That Guy's Heart Out

What did I say about not crossing Rebekah? The girl is a stone-cold killer, and frankly, I'm really grateful she's on Hayley's side. That pregnant girl needs some protection, and I really like the girl-code they've formed.

Say what? Normally I can follow Klaus's speeches pretty well (he's an articulate guy), but even I had to rewind here.

It's perfectly understandable to be a little angry when the mother of your child tries to harm your baby, but Klaus goes way overboard. For a guy trying to hard not to care about having offspring, he really flips his lid. I'm glad at least Rebekah makes sure she's OK.

Kissy kissy! The passion between Rebekah and Marcel is palpable, though to be completely honest, I do find it a little creepy that Rebekah has watched him grow up before her very nonaging eyes, and falls for him. Then again, the dude looks great without a shirt on.

When Davina Brings Some Attitude

'Scuse me? Who do you think you're talking to, little girl? Rebekah is an Original, which is why I was so taken aback to see her get thrown up against the wall by that little demon child. So Marcel's little secret, Davina, isn't just a witch, she's something much more powerful.

This is so not cool. No wonder Rebekah is romantically scarred! Not only does her brother leave her daggered for over half a century, the love of her life gives her up. Such a shame! I guarantee we haven't seen the last of Rebekah's love story with Marcel.

What did you think of the second episode of The Originals?

Image Source: The CW
The OriginalsTV
Around The Web