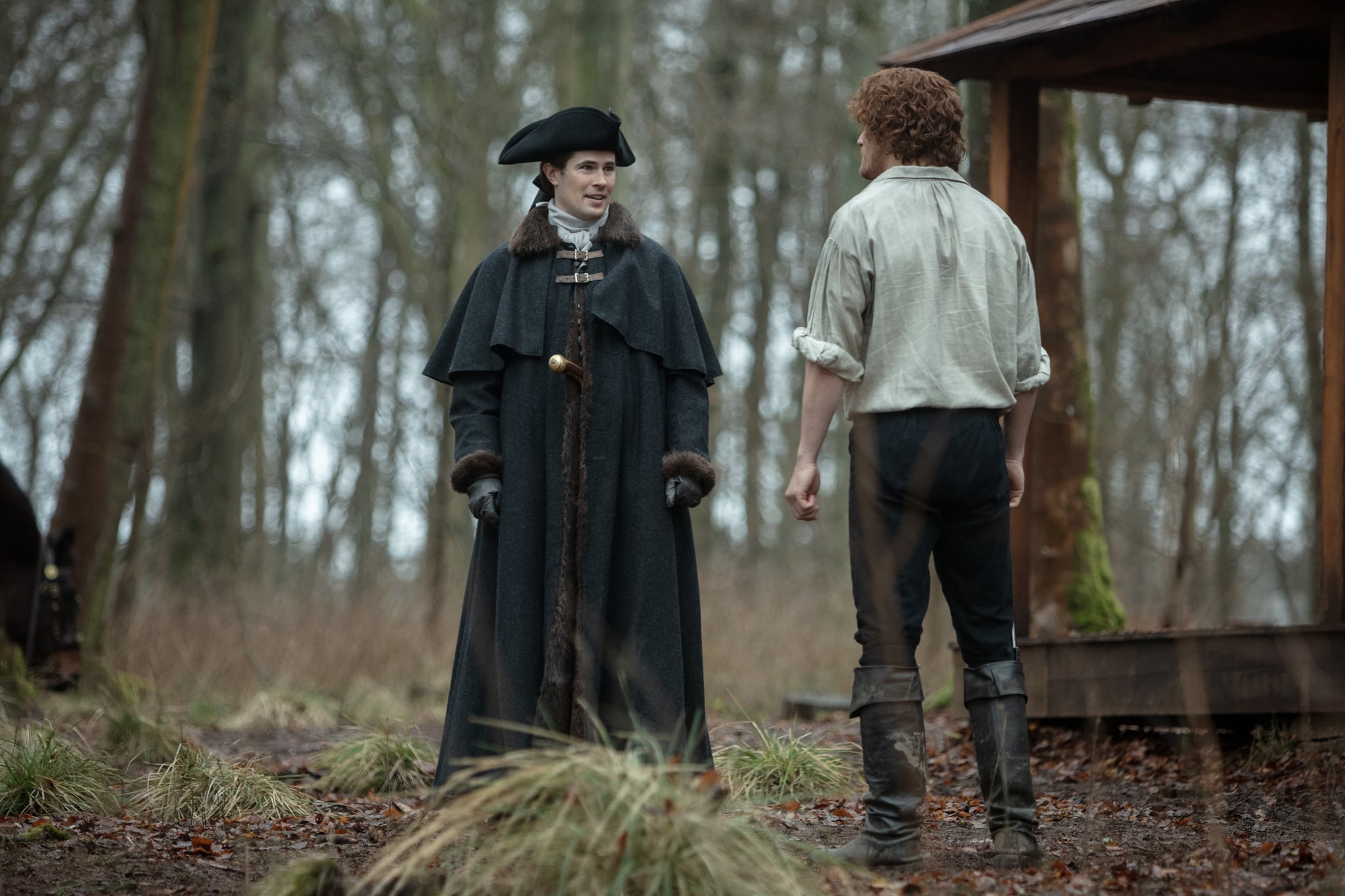 Warning: spoilers ahead for the latest episode of Outlander!

Unexpected house guests have a tendency to make things awkward, especially when they carry so many secrets. Sunday's episode of Outlander, which is (fittingly) titled "Blood of My Blood," welcomes Lord John Grey (David Berry) — aka the guy who is so in love with Sam Heughan's Jamie that he'll cross an ocean for him — to the wilds of Fraser's Ridge, along with his petulant ward, William (Oliver Finnegan), who is actually Jamie's son.

While this does solve the mystery of whether Jamie would ever see Willie again, the episode also offers a chance for the kind of good, old-fashioned dirty laundry airing that happens when mortality may be approaching. When Lord John is suddenly taken ill with measles, Claire (Caitriona Balfe) sends Jamie and Willie off for some unexpected, secret father-son bonding. Then, she and John have a heart-to-heart about their shared passion for the rugged Scotsman while she sits beside what could have been his deathbed.

"It was really heartbreaking to see this man be so consumed by the pain of unrequited love," Balfe told POPSUGAR about filming those scenes, crediting both her scene partner and the episode's director, Denise Di Novi, for helping her pull it off. She went on to note that Claire, who was also separated from Jamie for years, "can relate to [this] in many ways."

"I think the one thing that I wanted to do with those scenes, at least from Claire's perspective, is not have her be threatened by this and have her be more compassionate to the pain that he had gone through," Balfe said. "And then, obviously, when he tells her the secret that he's been harboring about Jamie? Again, it's not that that threatened her."

"It was really heartbreaking to see this man be so consumed by the pain of unrequited love."

Instead, she says it's more of a realization of how much it must have taken for Jamie to ask John to protect and raise William as his own and carry out the ruse that his child was the orphaned son of the deceased Earl of Ellesmere, Ludovic Ransom (William's mother, Geneva Dunsany, dies in childbirth; she was John's sister-in-law, and she got pregnant when she blackmailed Jamie into sleeping with her. To complicate things, Jamie killed the earl when he said he knew the newborn baby wasn't his and threatened to throw him out the window).

Balfe says her character is thinking about "how much pain he must have been in, in losing his son and wanting to make sure that his son was being taken care of" when Jamie skipped town a few years later after locals began to comment on shared resemblances.

Unbeknownst to Claire at the time of this heart-to-heart with John, Jamie is saving William's life yet again. This time, the lad doesn't heed his warnings about land borders. He also lets that paternity secret slip, which is going to probably result in some very personal chitchat during William and John's horse ride to their next destination. (A departure that couldn't have come soon enough, as it allows for the audience to finally see the intimate sex scene that Balfe teased to POPSUGAR earlier this year.)

Books
Obsessed With HBO's "The Time Traveler's Wife"? Here's What Happens In the Book
by Megan Hippler 4 hours ago

Netflix
"Selling Sunset": The Cast's Friendships Behind the Scenes
by Chanel Vargas 18 hours ago