Director Guillermo del Toro's Pacific Rim may not have a marquee full of huge names, but everything else about the Summer sci-fi action flick is big — huge, in fact. Giant monsters (called Kaiju) battle giant robots piloted by humans (called Jaegers) for the fate of the planet, and while it's not the most highbrow of premises, the 3D movie is hugely entertaining. Keep reading to find out why Pacific Rim has all the qualities of a fun Summer movie and why you should see it. 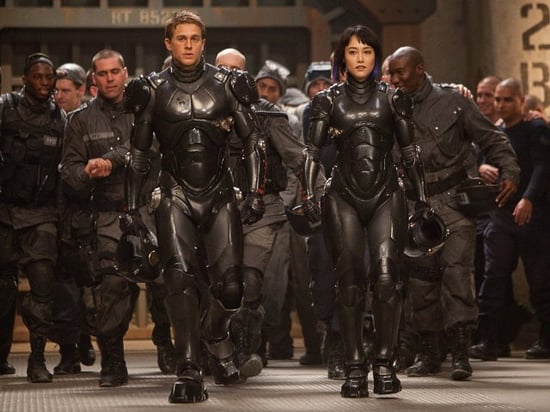 The monsters are incredible
Del Toro is particularly talented at dreaming up insane-looking creatures, and he goes all out for Pacific Rim. The Kaiju are enormous beasts that look like they're the spawn of every big-screen creature ever: mutants that are part Godzilla, part alien, and all horrible. They run, they swim, they fly, they destroy everything, and while they're almost too outrageous-looking to be truly scary, they still look realistic, because the special effects are so high-quality. It's not just fun to see — it's a feat of filmmaking.

The 3D is outstanding
One of the reasons del Toro's monsters are so frightening is because they're in 3D, and this 3D is actually incredible. The technology is no longer a novelty — it seems like half of this Summer's movies have been in 3D — but Pacific Rim is the only one that I think really uses it to its full potential. The 3D makes you understand how big the Kaiju are supposed to be, because it feels like they're coming straight at you.

Charlie Hunnam
Hunnam isn't a household name unless you're a fan of Sons of Anarchy, but he has the responsibility of playing the main character in a film where humans aren't necessarily the stars (that'd be the Kaiju). Hunnam has major star quality as one of the Jaeger pilots; he's got the swagger and, frankly, the look of an action star. While other Pacific Rim actors like Idris Elba and Charlie Day may be a bit more recognizable, it's Hunnam you'll be talking about after the credits have rolled. Just look at him!

Netflix
The Rugrats Movie, Bolt, and 101 Other Family Movies Kids Can Stream on Netflix in 2020
by Alessia Santoro 14 hours ago