As the trailer for Pacific Rim points out, most people generally assume that if aliens were to come to Earth, they'd probably come from space, right? Wrong. Guillermo del Toro's upcoming sci-fi film rests on the premise that these destruction-seeking beings come from a portal deep in the ocean. This is pretty bad news for Earth; good thing we've got Charlie Hunnam (Sons of Anarchy) and Idris Elba on the case! The two star as members of a special ops team carrying out Operation Gypsy Danger, aka Operation Kill Those Aliens. These are not your mother's aliens, either. These are giant beastly monster aliens. 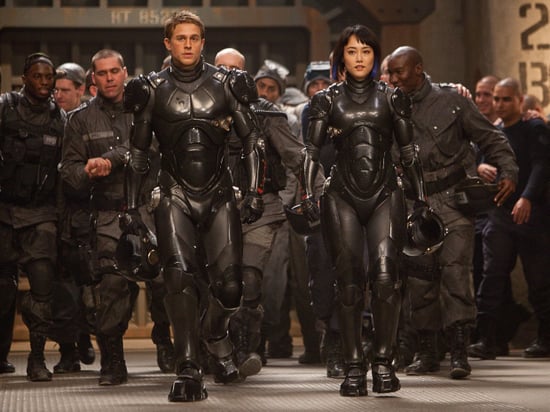 Del Toro's known for his unique visual approach to filmmaking, and if this trailer is any indication of the movie, Pacific Rim is going to be epic. It's tense, there are giant Iron Man-esque suits and humongous monsters, and yet it feels oddly realistic. There's something about seeing monsters destroy actual landmarks (in this case, the Golden Gate Bridge) that sends shivers down my spine. Pacific Rim is set to open July 12, and you can watch the trailer after the jump.

Margot Robbie
A Hose, a Kiddie Pool, and Other Products The Suicide Squad's Makeup Team Used on Set
by Danielle Jackson 14 hours ago