Elizabeth Banks is popping up everywhere this year, most recently as Capitol employee Effie Trinket in The Hunger Games, but she's out of the wig and crazy clothes for People Like Us. In the dramedy, she plays Frankie, a bartender with a young son who's struggling to get by. Meanwhile, Chris Pine plays Sam, a slick businessman who's massively in debt, and when his father dies, he gets his hands on $150,000 of his dad's cash — only it's not for him, it's for Frankie, whom he learns is the sister he never knew he had. When it's up to him to deliver the money, he doesn't tell her who he is at first, but still finds himself bonding with Frankie and his nephew. 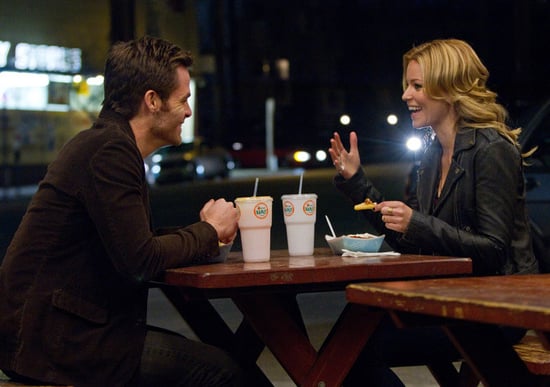 Even though Banks is becoming ubiquitous, I still like seeing her explore different roles, and I'm curious to see how she and Pine are as onscreen siblings. Pine just recently won me over in the romantic comedy This Means War, but he obviously has a bigger dramatic challenge here as Sam. The movie looks a little schmaltzy with its unconventional family-bonding theme, but with a stellar cast that also includes Michelle Pfeiffer and Olivia Wilde, I'm definitely interested. The movie comes out June 29, but you can watch the trailer after the jump.

Nostalgia
Son of a Nutcracker! Fisher-Price Just Released a Collectable Set of Elf Figures For Kids
by Alessia Santoro 11 hours ago