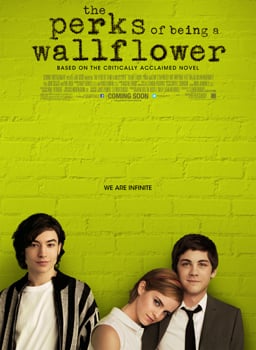 As a big fan of the book The Perks of Being a Wallflower, I've been dying to see footage from the film adaptation of the coming-of-age tale. Good news: the trailer is going to drop during Sunday's MTV Movie Awards, but before that, we do have a look at the movie poster! It's reminiscent of the lime-green cover of the book and shows off three of the main characters: Patrick (Ezra Miller), Sam (Emma Watson), and Charlie (Logan Lerman), who tells the story of himself and his high school friends. It's not a ton, but it still has me pumped to see the preview. Get a closer look at the poster after the break.