The plot to Premium Rush is simple: the life of a bike messenger, played by Joseph Gordon-Levitt, is put in danger when he unwittingly stumbles into some major trouble on his Manhattan route. It's so simple, in fact, that you might wonder if this hook is baited strongly enough to keep audiences entertained for an entire film. Rest assured, action fans (and bicycle-lovers); not only is this smartly crafted action flick my pick for Summer's most pleasant surprise, but also, Premium Rush keeps pace with some of the genre's best movies. 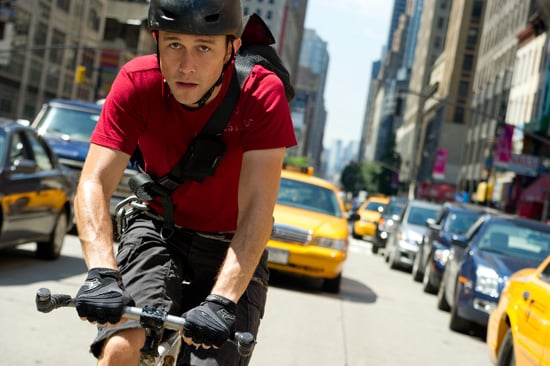 Premium Rush picks up when Wilee (Gordon-Levitt) is assigned a "very important" delivery to Chinatown. What he doesn't realize, of course, is that the envelope contains some extremely sensitive material: a mysterious slip of paper that crooked cop Bobby Monday (Michael Shannon) is desperate to get his hands on. Luckily for the sender, Wilee is one of New York City's most skillful bike messengers. The crafty adrenaline junkie abhors the idea of working in an office and instead opts for a humble gig delivering packages via his bicycle, which he rides sans gears or brakes. That's about all the backstory we get on Wilee, and, frankly, it's all we need; commendably, the movie isn't muddled with too many insignificant details. To find out what makes Premium Rush stand out, just keep reading.

Gordon-Levitt, donning his safety helmet and boyish grin, is undeniably charming, as Wilee straddles the line between cocky and confident. That said, it's Shannon's Detective Monday who steals the show. Fans of Boardwalk Empire have seen Shannon's ability to portray a buttoned-up character with menace boiling below the surface, but here he loosens his crazy collar a little. His characterization of the cop with "impulse-control issues" evokes shades of Dennis Hopper's madman from Speed, and though it at times veers close to cartoonish, it's always entertaining. He and Gordon-Levitt have great chemistry as nemeses, and they're a far more interesting pair to watch than Wilee and his love interest (Dania Ramirez) in a subplot that feels flat.

The movie's many bike-riding sequences are also entertaining; they could have easily been boring, but they're spiced up with video-game-like graphics to illustrate routes that Wilee calculates in his head. While he projects the carnage that would result in turning left or right, we see the gory possible scenarios play out before he makes his split-second decisions. Wilee knows his modest two-wheeler can go where cars can't — including oncoming traffic lanes, narrow alleys, under overpasses, and literally on top of parked cars — and his intense jaunt through NYC is fast-paced and action-packed.

At 91 minutes, Premium Rush is a compact film, but it's impressive in its simplicity. There are no CGI creatures or overblown, costly sets to create its heart-pounding moments, just some old-fashioned creativity. While aspects of the plot may fall into campy territory, the film has real heart at the center. I underestimated Premium Rush, but packed with wit and originality, it's one of the Summer's most enjoyable movies.