The fourth season of Pretty Little Liars is finally here, and you know what that means: instead of getting the answers we're hoping for, we end up with more questions. The aftermath of the lodge fire reveals an unexpected casualty, Alison's mother returns suddenly to Rosewood, and the harsh reality of Ezra and Aria's breakup begins to sink in. 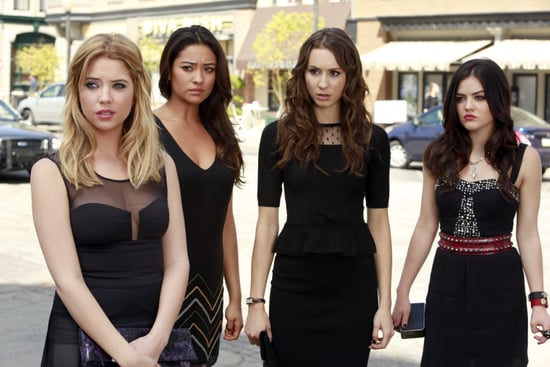 From A's latest casualty to Mona's unexpected shift of allegiance, find out which moments had us saying "OMG" after the jump.

Side note: Remember when Spencer goes totally insane last season and ends up in the mental hospital? She's back to her old self in the season premiere, and everyone's pretending like it never happened. OK, cool, just wanted to make sure we're all on the same page.

So, where does this episode leave us? Looks like we'll have to wait until next week to find out, but don't hold your breath for any speedy resolutions.

Netflix
Where Is Selena's Husband Chris Pérez Now?
by Camila Barbeito 14 hours ago

Netflix
How Selena's Family Was Involved in the Production of Netflix's Selena: The Series
by Camila Barbeito 16 hours ago

Matthew Perry
Matthew Perry Just Dropped a Chandler Bing Merch Collection — Could This BE Any More Amazing?
by Yerin Kim 17 hours ago

Star Wars
ICYMI, This Is What Moff Gideon Really Wants From Baby Yoda on The Mandalorian
by Amanda Prahl 18 hours ago