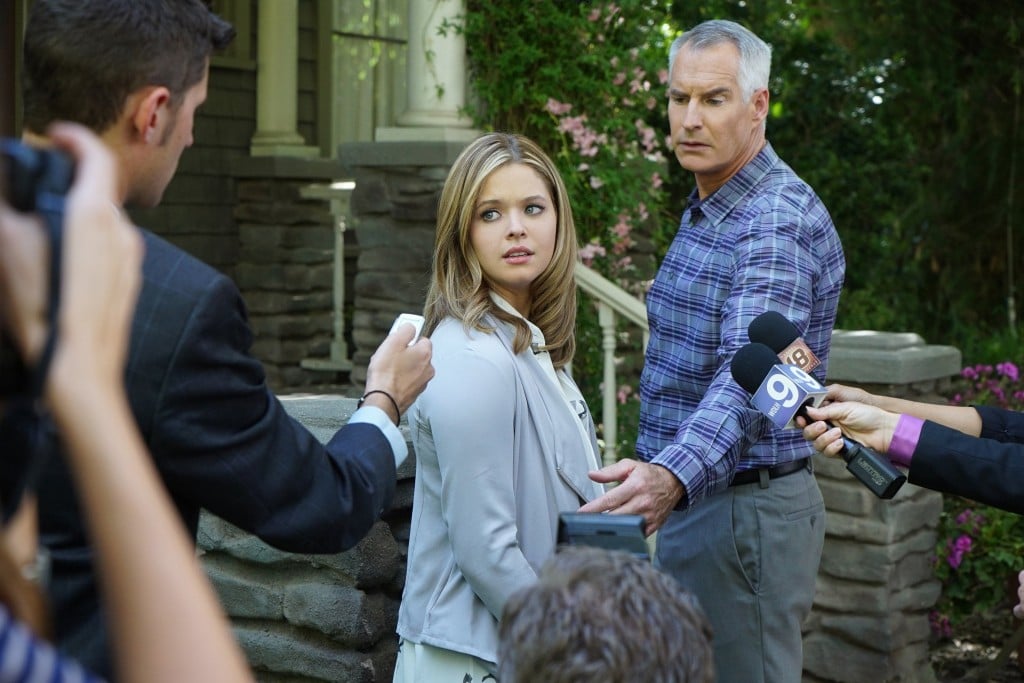 The sixth season of Pretty Little Liars is finally upon us, and judging from the eerie season premiere promo, we're in for our darkest season yet. By now, we've had plenty of time to let the season finale sink in. Despite all of our theorizing on who "A" actually is, we got a name we've never heard before: Charles DiLaurentis. This has sent us into a confusing spiral of many questions and very few answers. What's the deal with Andrew Campbell? Who, exactly, is Charles DiLaurentis? How does he play into this whole mystery? In our recent interview with Janel Parrish, she talks a bit about the show's latest riddle, but we're hungry for more. Sasha Pieterse (who plays Alison) hopped on the phone for a Q&A conference call this week, and she helped clear a few things up just in time for the new season. Keep scrolling to get all the juicy details.

1. What's the deal with this whole time-jump thing?

Sasha Pieterse: "It's an interesting twist because so many different weird things happened to the girls at this time in their lives in high school, and now this is something totally different. They're grown up, and their lives have moved different directions and I think the fans are going to really enjoy seeing that."

2. Does the time jump happen in the premiere?

SP: "We are on our eighth episode now, and you're about to see the first episode. So, we're quite far ahead. I think I should say that we haven't started the time jump yet."

3. Who the hell is Charles DiLaurentis?

SP: "I can tell you that Charles is somehow related to the DiLaurentis family. . . . He's this self-destructive, hypersensitive crazy genius that is haunting these girls, and his ultimate dollhouse does include Alison. . . . Charles is obsessed with the girls and obsessed with everything that he has created in his mind. So, to have the real Alison is his obsession and his dream."

SP: "This is a new element for Pretty Little Liars, and we finally found out who 'A' is. Everything is going to fall into place, makes sense — and we'll find out how this has all come about as well as the history of Charles and the reason he is so obsessed."

5. Does Ali actually know who Charles is?!

SP: "She has no clue who this person is. It's completely a shock to her. That also brings up: if Charles is somehow related to the DiLaurentis family, how come no one knew about him? That unravels a whole other different-but-cool story line actually, because as much as everyone knows what's happened, and [as much as] the girls are trying to figure it out, they're also following their own story lines and their own demons."

6. How dark is season six going to be, exactly?

SP: "It's really dark . . . the girls go through very adult things, and this is definitely the darkest season that we've encountered. I think that's because we brought Charles into it. Now that you've realized that this is someone that could be a lot closer than anyone ever knew, I think it's frightening."

7. All right, point blank: are Andrew Campbell and Charles DiLaurentis the same person?

SP: "Andrew is a weird component in all of this. I can't really tell you if he's Charles or not, but he definitely has something. It might not be what you think it is, but he's really cool. He came out of nowhere. But at the same time, he was always there. I know fans aren't necessarily surprised because they're going and rewatching the episodes that he was in and are now really suspicious of him, which they should be. It's this weird dynamic, especially now between him and Aria and why he's doing what he's doing. So, I think the fans will enjoy the outcome of what happens to Andrew for sure."