Prince Avalanche is one of the indie gems that has been making the festival circuit (Sundance, SXSW, Tribeca), and now we've got a trailer for the film. Paul Rudd goes against type (and sports a mustache!) to play Alvin, an uptight road worker who is spending some time in the middle of nowhere with his girlfriend's little brother Lance (Emile Hirsch). Painting lines on the road doesn't prove to be as rewarding for Lance, though, whom Alvin deems to be mentally slow. 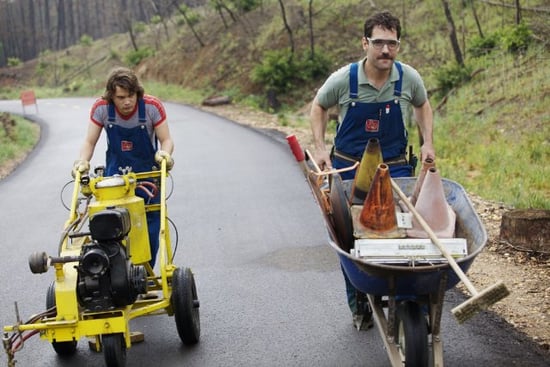 The trailer for Prince Avalanche seams to blend Alvin's dry humor perfectly with Lance's goofiness. It's especially refreshing to see Hirsch being the oddball and Rudd the straight man, since it feels like a departure for both actors. The film will be released Aug. 9, but watch the trailer when you read more.

Netflix
If You're Excited About Netflix's White Tiger Movie, You Need to Read the Book, Too
by Kalea Martin 7 hours ago

Jamie Lee Curtis
Lock Your Doors! Michael Myers Is Back in the Suspenseful Trailer For Halloween Kills
by Chanel Vargas 2 days ago