The first teaser for Prometheus really didn't give much away about Ridley Scott's latest film in the Alien series, but the new trailer tells a bit more of the story and gives you a look at the sci-fi flick's good-looking stars. Michael Fassbender, Charlize Theron, and Noomi Rapace are part of a team of scientists and explorers looking for the origin of man on another planet, but they find much more than that — and it does not appear to bode well for the survival of the group. 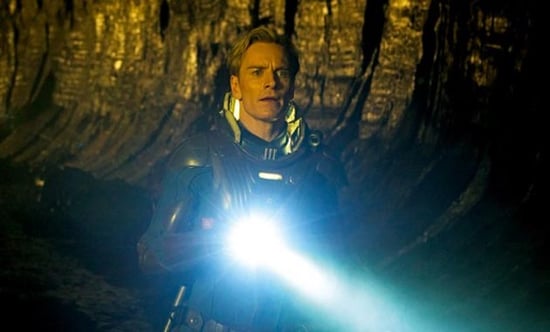 The alien life is presumably the predecessor to the ones that stalked Sigourney Weaver and co. in the Alien films, but you don't get to see any creatures in this preview. I'm OK with that, though, because the music in the trailer gets so terrifying and stressful toward the end of the clip that it's enough to freak me out. Watch for yourself after the jump.

Netflix
Karla Souza Says She Insisted on Doing Her Own "Day Shift" Fight Scenes: "I Don't Want Any Doubles"
by Njera Perkins 5 hours ago